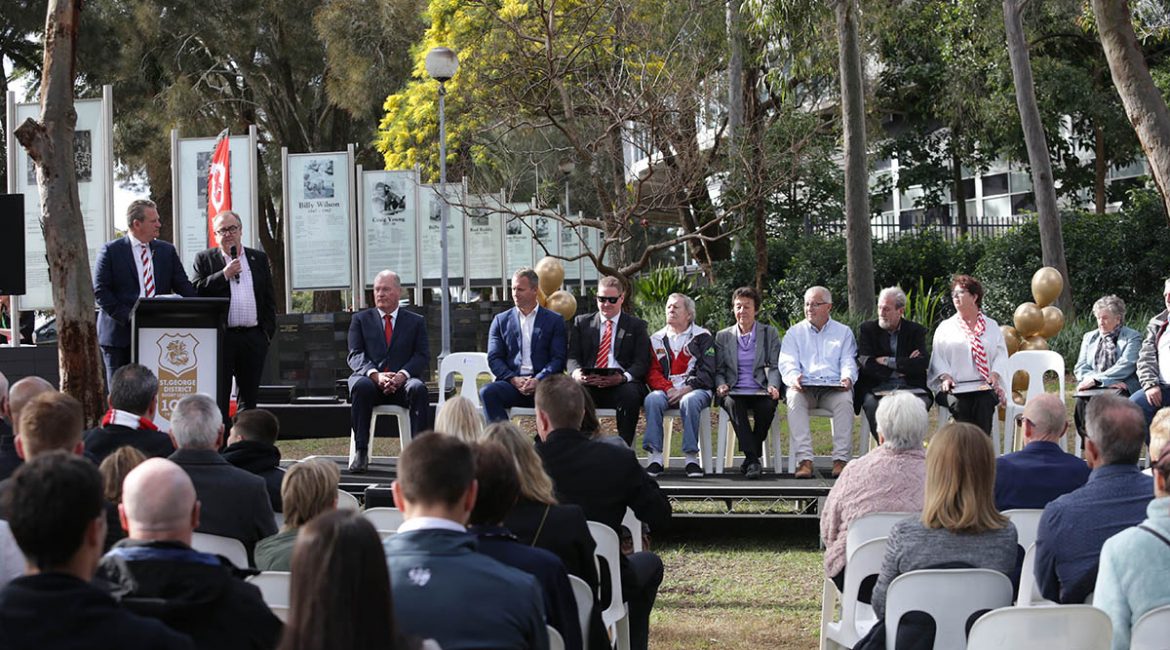 The Dragons “Team of the Century” was named last week as part of 12-month Covid-19 delayed Centenary celebrations for the St George District Rugby League Football Club (established in 1921) and the addition of these four new inductees takes the number of players in the ‘Legends Walk’ to 26.

“The Legend’s Walk is a unique memorial that recognises the personal contributions to the success of rugby league and the Dragons since 1921 and we are delighted to see Harry, Mark, Neville and Doug inducted here today,” said St George District Rugby League Football Club and St George Illawarra Dragons Chairman, Craig Young.

“All were named in the ‘Team of the Century’ last week and thoroughly deserve their place both in the Team and this Legend’s Walk that is significant in the history of this club”.

Former player and coach Harry Bath was a ball-playing second-rower and prop who won a Grand Final in each of his three years as a player (1957-59) and he broke the Saint’s point scoring record in 1958 with 225 points.

Bath was also one of the game’s greatest coaches — he started with St George reserves in 1960, he also coached at Balmain, Newtown and Australia in three World Cups (1968, 1970 and 1972) before famously returning to Saints to win premierships in 1977 and 1979.

Gasnier Captained the Club in 2007 and 2008, won the “Player of the Year” in 2006 and was part of the Premiership in 2010. He was widely regarded as the best centre of his generation playing 44 Tests and 12 State of Origin matches for the New South Wales.

He played 81 games for the club, was captain in 28 and also played four interstate matches for New South Wales and six Tests for Australia.

Neville Smith was a second-rower who holds a special place in the history of the club, as the captain-coach of the first Dragons team to win a first-grade premiership (1941).

Smith played 59 games as captain-coach between 1929-41 and 1943 and scored 281 points in a career that was cut short through injury. He was the NSW Rugby League premiership’s leading point scorer in 1939 and played for NSW in 1940 and 41 and would have been a Test certainty but for the absence of international football due to the war.

Dragons Team of the Century

Teams of the Eras