The Origins of the St George District RLFC 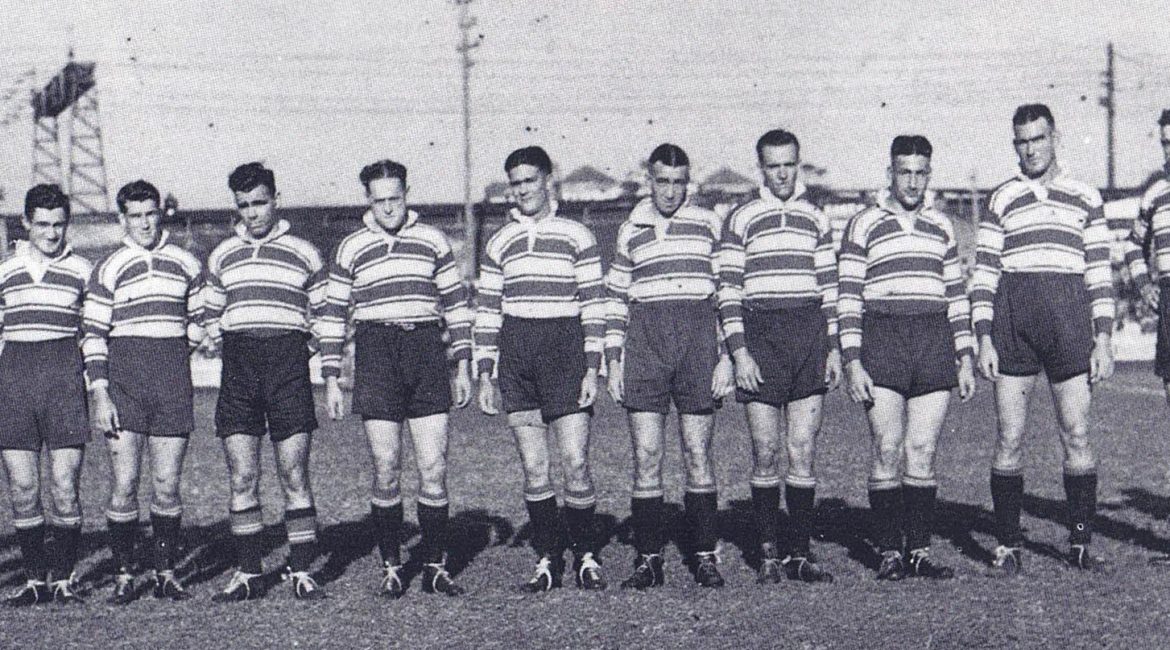 One of the first games of club football in the St George district occurred at Kogarah in 1886, when a local team — described by the Daily Telegraph as ‘newly formed’ and the ‘red and whites’ — welcomed a side from West Sydney. The contest took place under the laws of what the paper called the ‘Australasian game’. A number of teams playing ‘Aussie rules’, ‘Association football’ (soccer) or rugby union came and went over the next few years, but perhaps the most significant moment in the early history of football in the district came on 9 March 1892, when a meeting was held at Rockdale with the intention of forming a rugby football club. ‘After a long debate as to a suitable name, Rockdale was chosen and colours black and turquoise,’ revealed the Telegraph. Twenty-five footballers signed up on the spot.

The new club quickly swallowed up all its competitors. In 1896, it was reported that ‘all the football strength of the St George electorate is this year concentrated in the Rockdale Club, as there is no other club between St George and Cooks River, Kogarah having amalgamated with the Rockdale Club’.

Several new clubs would emerge along the ‘Illawarra line’ — the name given to the railway opened in 1884 that ran through the district and on to Wollongong and the south coast — during the next few winters, as football’s popularity grew across Sydney, but Rockdale would remain the epicentre of football (and other sports) in the district at least until the Great War. In 1896, the Australian Town and Country Journal reported that the St George Harriers, an athletics club, had set up headquarters at the Grand Hotel, Rockdale, adding, ‘The club’s colours are white, with red cross on chest.’ Two years later, the Evening News reported on the activities of St George’s Sailing Club, which held regular regattas on Botany Bay, and noted, ‘The club’s colours are a red cross on a white ground.’ In both cases, with the clubs taking the name of the district, rather than a specific suburb, it was natural to adopt the colours and cross of the flag of St George.

By 1898, the Rockdale Football Club were competing in the first Juniors Competition, the second most important competition in Sydney rugby. One of its chief rivals was Newtown. The Metropolitan Rugby Union, formed in 1896, was planning to turn its top-tier competition into one based on districts. This would occur in 1900, and to ensure their participation, Rockdale and Newtown merged prior to the 1899 season, with Newtown retaining naming rights. To fill the void left by this development, new junior clubs emerged in and around Rockdale. The strongest of these was Rockdale Oaks.

In 1902, the MRU established a ‘Borough’ competition, to sit below its first-grade and second-grade premierships. A new club was established at Rockdale, largely built around Rockdale Oaks, which became known as ‘Rockdale Borough’. Playing in a city-wide MRU competition, it saw itself as being representative of the entire district. With no ties to the original Rockdale club, it chose to play in red and white.

Rockdale Borough enjoyed some success, and with the district’s population rising and rugby football booming, the MRU soon decided to invite teams from St George and Manly to play in its first-grade competition.

On 7 April 1906, The St George Call reported: ‘Although the district club, as yet, has no official existence, and consequently no official colours, it is taken for granted in Rockdale that they are to be Red and White, presumably because they were the colours worn by the Rockdale Borough team.’ The paper suggested that ‘a white jersey with the red cross of St. George on the breast would be hard to beat’.

A week later, The Sydney Morning Herald revealed that ‘the colours of the club will be four-inch bars of red and white’.

The NSW Rugby League was formed in Sydney in August 1907. The inaugural premiership commenced in 1908. The organisers led by James J. Giltinan made a deliberate decision to mimic the rugby union grade competition when it came to club boundaries, which were based largely on electorates, and colours. The rugby league clubs took the same colours as the rugby union clubs they were now competing with for participants and fans. A meeting was staged at Rockdale Town Hall on 28 February 1908 to form a rugby league club in the St George district, but not enough members of the St George rugby union club were prepared to switch codes. Some newspaper reports claimed that as many as 30 men signed up; elsewhere, it was said that when it came time for players to formally register their interest, ‘Everybody made for the door, and not one member was enrolled.’ The truth was probably somewhere in between.

Two years later, an attempt was made to establish a junior league in the St George district, but when the response was limited it was decided instead to form a single team to compete in the NSWRL’s third-grade competition. The man who led this process was Allan Clark, who had been the secretary of the Sans Souci rugby union club. Clark became the secretary of the new third-grade team. Its playing colours were described in the press as ‘four-inch red and white jerseys, black knickers, black hose with red and white tops’, an outfit close to that worn by their rugby union rivals. This team made its premiership debut on 30 April 1910, beating an under-strength Newtown side 36–0. The third-grade season in 1910 was somewhat disjointed, with several forfeits (not by St George). St George failed to make the third-grade final.

The St George electorate in 1910 was part of Newtown territory (Newtown already had its own third-grade side, which is why the St George team played under its own name). In the 1910–11 off-season, boundaries were altered, and the St George electorate was shifted into Western Suburbs’ territory. For 1911, the Saints’ third-grade team was renamed ‘Western Suburbs III’ (Wests had not entered a third-grade side in 1910), but the team remained based at Kogarah. This change followed a second unsuccessful attempt by people in the St George district to form a premiership club. Allan Clark organised this campaign, and enough players signed up to support the bid, including the Test forward ‘Tedda’ Courtney, but the application was rejected by the NSWRL in January 1911.

Clark then led the push for a St George Junior Rugby League to be established. This occurred on 3 March 1911, with Western Suburbs as the senior club. The first round of matches in the St George Junior League took place on 29 April 1911. St George entered a team in the President’s Cup for the first time in 1911, losing all five of its matches. Kogarah District were the inaugural A-Grade premiers, with Banksia Waratah undefeated in B-Grade. Another unsuccessful application to join the NSWRL premiership was made in 1913. The NSWRL did not add or delete any clubs for that season or during the years of the Great War. However, by 1920 St George’s claims were irresistible. Population-wise, the district was one of the fastest growing in the metropolitan area. A team from Sydney University was included in the premiership that year. Annandale won one match from the start of 1918 to the end of the 1920 season. The rugby union premiership was not played during the war years, and when it resumed in 1919 the St George club was no longer a participant (they would not be readmitted until 1928). More than 30 clubs were affiliated with the St George Junior League in 1920, over three grades. The premiers for the year were Marist Brothers in A-Grade, Bexley Waratah in B-Grade and Langlea in C-Grade.

On 20 September 1920, Joe McGraw, a long-time sporting official in the Glebe and St George districts who was now the secretary of the Junior League, sought permission from the NSWRL ‘to form a first-grade club in the St George district, to compete in the competition next season’. The application was considered on 6 October, and the representatives from St George were invited to put their case in person at a meeting a week later.

It was at that 13 October 1920 meeting that the NSWRL decided to formally invite St George to form a club and to eliminate Annandale. McGraw then convened a meeting for Monday, 8 November 1920, at Kogarah School of Arts, to officially form the St George District Rugby League Football Club. He became the club’s first honorary secretary. He and his old friend Allan Clark were the club’s first delegates to the NSW Rugby League.

The club’s first general meeting was conducted on 7 February 1921. The club’s first official trial was staged on 6 March 1921, at Sans Souci. The club’s first premiership match was played on 23 April 1921, St George Day, against Glebe. at the Sydney Sports Ground. ‘Newly-formed St George, representing the Illawarra district, made a satisfactory beginning,’ reported The Referee, Sydney’s leading sporting newspaper. ‘The match was hard and close, with splendid defence on both sides.’ Saints’ George ‘Bluey’ Carstairs scored the only try, but the debutants were defeated 4–3.

St George were captain-coached by former Australian skipper Herb Gilbert and the team featured two players — 21-year-old centre Carstairs, a local product from the Marist Brothers club, and halfback Albert ‘Rick’ Johnston — who would tour Great Britain with the 1921–22 Kangaroos. Wins were hard to find, but Saints were competitive in every match. Their two victories, from eight matches, came in successive weeks in late May, against Newtown and University. Saints finished seventh, of nine teams, in the premiership, and then eighth in the City Cup competition that was staged after the Australian team left for England.

It was a satisfactory start. Herb Gilbert’s enormous contribution to the club had only just begun.