The Best Dressed Team in Football 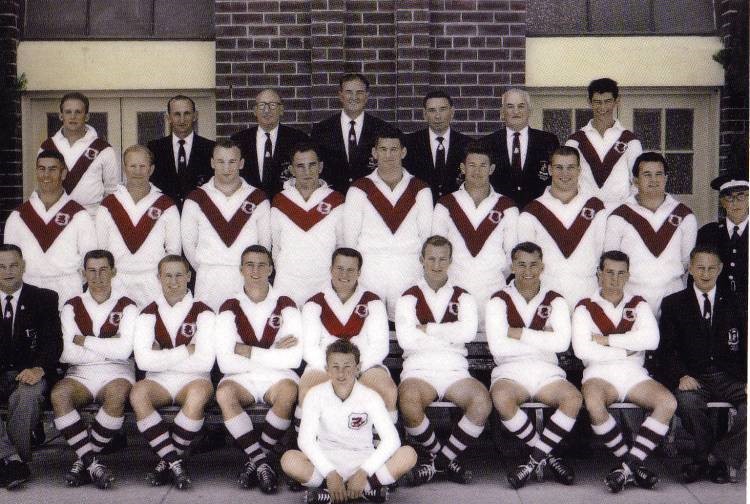 Reports from the new club’s initial meetings in November 1920 suggested the team’s jerseys would be ‘red and white with six-inch bars’. In fact, the hoops would be four inches wide. It was proposed that the team would also wear ‘navy blue hose and knickers, with red and white tops on hose’. This remained the team’s uniform until the end of 1928. At the club’s annual meeting held prior to the start of the 1929 season,

The Propeller reported: ‘St. George will he wearing the same colours this season, but they will be of a new design. The guernseys will be white with a red V-shaped four-inch bar. A badge on the front of the guernsey will represent St. George and the Dragon. White shorts will also be worn.’

This report was not completely accurate. The Red V would not be four inches wide,

as Rugby League News explained: ‘The following motion was confirmed at the annual meeting, “That Rule 26 be altered as follows: ‘The colours of the club shall be red and white — white jersey with red V 1¼ inch wide, with stencil badge inside centre of V.’” Therefore, Saints will present a very neat and natty appearance when they file out on to the field today against Western Suburbs. If there was a best-dressed team competition in vogue this combination should about win out.’

The Daily Telegraph was similarly impressed:

‘St George this year will be the prettiest team playing rugby league. The familiar red and white is retained, but in a very different form. Jerseys now will be white with a red V in front, set off with a four-inch red dragon. The V will run over the shoulders to the large red number on the player’s back. White pants will complete the uniform.’

Saints wore this jersey for four seasons. In March 1933, the Telegraph wrote that the NSW Rugby League had approved a new jumper. ‘Instead of white jerseys with red V, St George players would this year wear jerseys with broken stripes and navy blue knickers,’ the paper stated. No specific reason for the change was given, but a strong clue was offered elsewhere in the same story: ‘St George also notified that 25 per cent of its proportion of gate receipts this season would be earmarked for division among the club’s prominent unemployed players.’ Adopting the ‘broken stripes’, or ‘butcher’s stripes’ as they were also known, a conventional design that was also worn by Norths, Balmain and Canterbury during the 1930s, saved the club some money as it battled through the Great Depression.

Tough times were also the cause of the next St George jersey change, which occurred leading into the 1943 season. In the previous December, the veteran league journalist Claude Corbett (who had once played for Rockdale Oaks) wrote in The Sun that while Souths possessed a sufficient supply of their red and green jerseys to get through one more season, other clubs were looking at changes because of supply shortages related to the war effort. Corbett claimed that Canterbury were expected to play in maroon, Norths in red, Balmain in ‘canary yellow’, Easts in green, Wests in black, Newtown in its traditional royal blue, St George in white. As it turned out, Easts wore light blue and only Canterbury’s lower grades played in maroon, but otherwise he was on the money. More than once during the 1942–43 off-season, The St George Call claimed that the club had applied to play in ‘red jerseys with a white V at the neck’, but then Corbett announced in early March that ‘should difficulty be experienced in securing jerseys in the regular colours, white with a red V will be adopted’.

Two days later, The Call added: ‘There is still a doubt as to the St. George colours for the coming season, but the club is keen to keep the existing red and white striped jerseys, and failing this the white jerseys with red V at neck may be introduced. St. George played in these attractive colours several seasons ago.’

This was the jersey St George began wearing in 1943 — not with the narrow Red V of the 1929–32 design, but a slightly thicker V, and no badge. Balmain and Norths added a black V of similar thickness to their respective yellow and red jerseys. Easts had a red and white V on their blue jumper. Saints continued to wear navy shorts and socks.

Balmain and St George kept these outfits in 1946, when the two sides met in the grand final. In November of that year, following the announcement that Manly and Parramatta would be joining the competition in 1947, The Daily Telegraph’s George Crawford revealed that he had heard that Manly were going to play in pale blue and cerise quarters and Parramatta in green and white vertical stripes.

This prompted St George president Clem Madden to say, ‘The drabness of Rugby League colours has always been criticised. It is pleasing to know that the new clubs are going to consider such suggestions. St George next year will probably wear white knickers instead of the old navy blue.’

In fact, this change did not occur until 1948, when the Telegraph reported:

Quickly, the predominantly white look with the thick red V became a trademark.

After round one in 1948 The Sun commented that the St George players ‘looked smart in their new uniform — white jersey with a red V, white shorts, and red socks with white hoops’.

Saints missed the grand final by a point in 1948, won the premiership a year later, were perennial contenders for the first half of the 1950s and then won 11 grand finals in a row. As sport moved into the television age, the White with a Red V became synonymous with success. It remains one of the great brands of Australian sport.

Before the 1959 season, a ‘crest of St George and the Dragon’ was added to the jersey. In 1962, the team wore a jersey of narrow (about two-inch) red and white hoops and black shorts for their game against Great Britain. Penfold Wines became a jersey sponsor in 1977, and a year later, as part of a revamp of all jersey logos undertaken by the NSW Rugby League, a new St George crest was introduced — featuring the name ‘St George’ at the top and a black St George and white dragon on a red and white background. Penfolds Wines remained the main jersey sponsor until 1995, to be replaced by Newmans Motor Group (1996–98), Integral Energy (1999–2003) and St George Bank (2004–20). With the creation of the St George Illawarra joint venture, the name ‘Illawarra’ was added to the bottom of the crest.

But the red and white jersey itself, and the ever-growing history and tradition it represents, remains essentially the same.