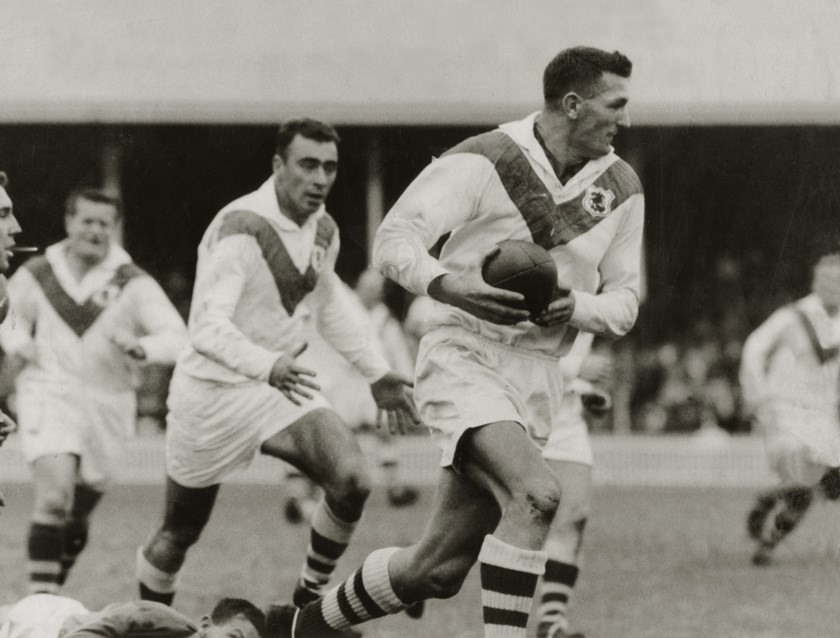 The St George District Rugby League Football Club is saddened to learn of the passing of a true legend. Norm Provan has died after a long illness, aged 89.

‘He was an Immortal to me from when I was 10 years old,’ Edge says. ‘In those days, the Dragons only played home games at Jubilee Oval four or five times a year, the remainder being at the Sydney Cricket Ground for the “match of the round”.

‘I have vivid memories of Norm standing at Jubilee, signing autographs for young fans until all were done, which is indicative of his character. Norm was not only a great player, with a playing record that no other player has been able to match, but an incredibly caring person to fans and players of our great game.

‘He was popular and revered by Dragons and opposition players, always in demand at reunions, and first to assist anyone who needed help.

‘It was always a pleasure and an honour to be in the company of a man of Norm’s stature, and the League is so privileged to have Norm Provan and Arthur Summons as guardians of our great game.’

Back in early March 1950, the local St George Call newspaper reported succinctly on a trial against North Sydney:

‘N. Provan, front-row forward, is a bright prospect. Never away from the ball, he displayed pleasing form.’

The teenage Norm Provan was a lanky, raw-boned forward. Born on 18 December 1931, he was one of eight Provan children raised on a small ‘soldier settlement’ block at Urana, near Lockhart in the Riverina. From there, the Provan family moved to Wagga Wagga, then the Sydney suburbs of North Bondi and Willoughby and finally to Kirrawee, in the Sutherland Shire. He became a St George fan during the club’s premiership year of 1949, telling author Norman Tasker in 2013: ‘I can still see big forwards like Jack Munn, Charlie Banks and Jack “Dutchy” Holland ripping in. There is no doubt it was that team that inspired me to be a Saint.’

Provan established himself in first grade in 1951, as a second rower, and would remain there for 15 seasons. His first man-of-the-match award came in his sixth game, against Balmain at Leichhardt, when Frank McMillan, the former Kangaroo captain who was judging the game for the Sunday Herald, commented,

‘A force throughout the match; opened up play from rucks; hard to pull down in several bursts; defence good. Promising young player, with size, strength, and determination.’

‘Sticks’ Provan stood 6ft 4in (193cm), weighed 15 stone (95kg) in his pomp, but his command of the game and influence at St George went well beyond his physique. Saints never missed the finals in his 15 years of first grade and won the grand final in each of his last 10. He set standards for discipline and fitness that inspired his teammates, and was captain-coach in his last four seasons in the red V, 1962 to 1965, overseeing the arrival at the club of Billy Smith and Graeme Langlands. The final image of him as a player is of a colossus striding through the mass of fans that had invaded the field after the Dragons’ 12–8 win over Souths in front of an SCG record crowd of 78,056. At international level, Provan formed one of Australia’s most revered back-row partnerships with Kel O’Shea, and was a star of Australia’s triumphs in the 1954 Ashes series and the 1957 World Cup, but it was his efforts for St George that forged the legend. In March 1963, he was the first active player to be made a life member of the club.

His representative career had started when he was chosen for ‘Probables’ to play ‘Possibles’ in a major selection trial after just eight first-grade matches. The Daily Telegraph called him ‘the find of the season’. In 1952, as St George won seven games straight to charge into the semi-finals, the Sunday Herald judges rated him the ‘best forward in Sydney’.

Horrie Maher in the St George Call commented, ‘Winning three major awards in his last four appearances, this tan virile player who neither drinks nor smokes has set an outstanding example for the others to follow.’ In 1954, after a thrilling 15–14 semi-final win over Norths, Maher wrote, ‘Norm Provan was, as usual, in grand form.’

The Herald judged him the footballer of the year. Provan played his 100th club game in 1955 and was rated by Truth’s Jim Mathers as the best forward in the ’56 grand final, when St George were forced to play with a five-man pack after centre Merv Lees was injured.

Press reports capture how Provan was consistently superb in St George’s grand final victories, especially in the early years of the 11-year winning streak when he was at the absolute peak of his powers.

The Sunday Telegraph’s George Crawford wrote of 1956: ‘Provan played like a demon. He tore his way through rucks, while his cover defence in the absence of a lock was unforgettable.’ Jim Mathers in 1957: ‘Big Norm Provan gate-crashed through the rucks like a bulldozer.’

The Sun-Herald’s Tom Goodman on the same game: ‘Lanky second rower Norm Provan was magnificent yesterday, whether hurling himself into tackles or breaking through and, once in the open, setting off with loping strides.’

Acclaimed sports writer Jack Pollard: ‘Thirty seconds after half time big St George second rower Norman Provan clutched the ball to his muscular chest and started to run down the centre of the SCG. The 1957 Sydney rugby league premiership was decided then. Provan palmed off Manly-Warringah defenders, stepped out of the arms of men who fanned at his legs, and ran deep into Manly’s half. He had done the same earlier in the season to the cream of League talent from Britain, France and New Zealand. This time he high-stepped it past Manly fullback Ron Willey with that characteristic hippy run and slipped the ball to Brian Clay, who scored under the posts.’

‘Norm Provan followed up his splendid display in the final with another match-winning performance.’ Former international Ross McKinnon told Truth readers: ‘Norm Provan was the hero, as apart from his two tries he was a tower of strength in cover defence.’

A year later, Crawford reckoned that

‘the Provan brothers (Peter and Norman) and winger Ed Lumsden were the stars of the match’.

Peter Provan was a fine lock forward who played for St George from 1955 to 1960, including the 1958 and 1959 grand finals, before transferring to Balmain, where he earned an Australian cap in 1963 and captained the Tigers to the premiership in 1969. Two other brothers, Ian and Don, appeared in the lower grades.

Norm Provan played his 206th grade game in August 1961, breaking Len Kelly’s club record. He was knocked out late in the first half of the 1962 grand final against Wests, prop Billy Wilson was sent off immediately after half time, but the captain-coach came back to inspire his men to a famous win. A year later, when many thought he was again the grand final’s best player, photographer John O’Gready snapped the iconic image of the mud-clad Provan and Arthur Summons, the Magpies captain, that became known as ‘The Gladiators’ and inspired the NRL’s premiership trophy. He threatened to retire more than once, but always ‘did a Melba’ until he finally called it quits in 1965. His second last game was a 47–7 thrashing of North Sydney in the major semi-final, after which Rugby League News reported:

‘Big Norm on Saturday was all over the field and appeared to be in every movement. He handled in at least six try movements as well as scoring one himself. St George officials cannot recall a better display.’

Johnny Raper rated Provan ‘the greatest rugby league player I played with or against.’

‘Provan was born to lead. His honesty, ambition, will to win, courage, dignity, modesty, pride in achievement, loyalty and fair play fitted him perfectly for the task.’

Ray Norman, once a Test player and one of the great students of rugby league, said:

‘There are a few players who have been really outstanding in this great game. They have had something which has lifted them above other very good players. Harold Horder was one, Frank Burge was really great and so was Duncan Thompson. Herb Narvo was a magnificent footballer too, because he was never caught in possession when he could pass. Norm Provan, with his long raking strides and intelligent, powerful football, ranks with the best forwards we have had.’

Ray Norman made those comments in 1958. At that point, Norm Provan was only halfway through his extraordinary, unrivalled playing career. Following his retirement — after 283 games, 256 first-grade premiership appearances (78 as captain), those 10 straight premierships, 18 Tests and 25 games for NSW — he was a non-playing coach at St George in 1968, and later at Parramatta and Cronulla, taking the Eels from the wooden spoon to the semi-finals in 1975 and the Sharks to the grand final three years later. Away from football, he was a highly successful businessman, managing electrical stores in the St George district and the Sutherland shire, and then running a caravan park in Cairns in far north Queensland, the Oasis Resort at Caloundra on the Queensland Sunshine Coast, and a cattle farm at Kuranda, near Cairns. For league followers across the country, he became — as Steve Edge so rightly remembers — the code’s ultimate statesman, universally loved and respected, and loudly cheered whenever he joined Arthur Summons to present the premiership trophy on grand final day. His induction as a rugby league Immortal in 2018 was widely acclaimed. The only wonder for Dragons fans young and old was why it had taken so long.