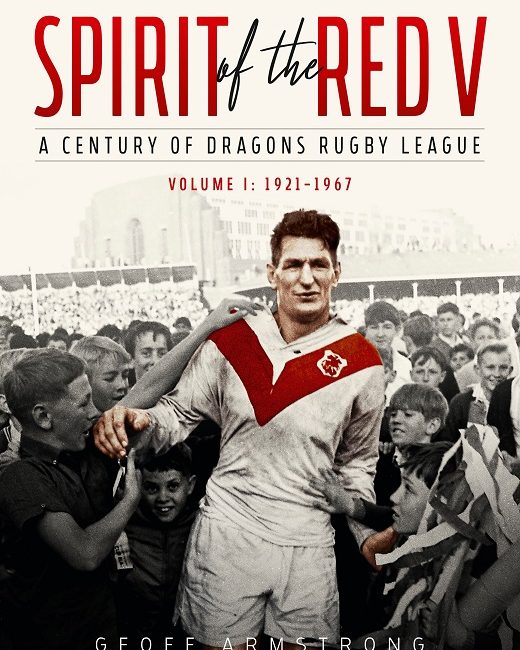 ON 23 APRIL 1921, the St George rugby league club made their premiership debut. They were, said the papers of the day, the ‘pride of the Illawarra district’.

Over the next 100 years, the mighty Dragons built a record of excellence unmatched in league history. St George were perennial finalists from the 1920s to the ’80s. They won 11 straight grand finals from 1956 to 1966.

The Red V jersey is one of Australian sport’s most iconic symbols of excellence. It is known across the world. No team has more passionate fans. Five League Immortals — Frank Burge, Norm Provan, Reg Gasnier, Johnny Raper and Graeme Langlands — played for the club.

THIS JUST RELEASED CENTENARY HISTORY of the St George rugby league club was not meant to be two volumes. However, as author Geoff Armstrong, the publisher at Stoke Hill Press and a diehard Dragons fan, delved ever deeper into the club’s unique story, he realised that a definitive account of the club’s first 100 years requires ‘extra time’. So many champions have worn the Red V. Famous matches and fierce controversies abound. It is important that those who ‘dug the well’ are not forgotten.

“…may I strongly suggest buying the first volume of esteemed author Geoff Armstrong’s Spirit of the Red V, the definitive history of St George’s 100 years of existence” Andrew Webster – SMH 21/08/21

“Through talented author Geoff Armstrong, the Dragons are about to release a two-volume history of the club called Spirit of the Red V, to celebrate its 100th season. Volume 1 has just landed on my desk and its hard to describe how impressive it is” Paul Kent – Telegraph 20/08/21

The Red V fanbase is the biggest and most passionate in rugby league.

“There is something special at St George, a fellowship, a friendship,” Reg Gasnier once said.

Gasnier is a Rugby League Immortal, one of five at the club and he like the other four is synonymous with class, greatness and the Spirit of the Red V.

Herb Gilbert led the Dragons that day in April 1921, and from those humble beginning borne out of the Kogarah School of Arts late the previous year, a sporting legend grew.

The famous Red V celebrates its centenary in 2021. During the first 100 years, the Dragons built a reputation for excellence, especially from 1956 to 1966 when teams featuring names such as Gasnier, Provan, Raper and Langlands won 11 straight premierships. Spirit of the Red V (Volume I) encapsulates the era from 1921 to 1967 and provides fabulous insight into how the Red V become arguably the most recognised brand on the Australian sporting landscape.

Written by respected author, sport historian and Dragons tragic, Geoff Armstrong the book takes us from the reasons why the club was not formed in 1908, the game’s foundation year through the early struggles, and how Frank Burge, another League Immortal, arrived in 1927 to build a winning Dragons culture. This revolution brought years of much success and then the 11 premierships, with more glory days to follow.

There are many heroes, a little sadness, and famous and controversial games, sometimes on fields of mud, always watched by huge crowds.