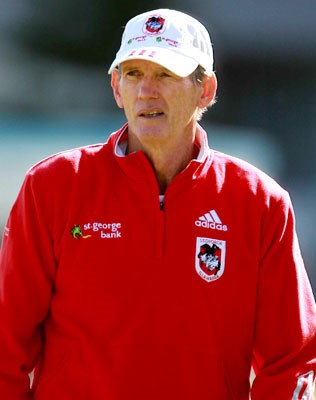 On 29 August 1998, St George lost 20–12 to Canterbury in an elimination final at Kogarah Oval. On 23 September, it was announced that the Dragons were establishing a joint venture club with the Illawarra Steelers. With a nod to the history of players from the Illawarra coming to St George — including champions such as Charlie Hazelton, Noel Mulligan, Graeme Langlands, Ted Goodwin and Craig Young — Saints president Doug McLelland said:

‘We are going to re-establish a relationship forged in tradition, history and legend.’

Among the Steelers footballers now wearing the Red V were internationals Paul McGregor, Rod Wishart and Craig Smith, and State of Origin five-eighth Trent Barrett. Mark Coyne was named captain, with David Waite as coach, and St George Illawarra’s first game was a 20–10 loss to Parramatta. Six and a half months later, after finishing sixth on the ladder, the Dragons lost the Grand Final in heartbreaking fashion to Melbourne, a late penalty try deciding the match in the Storm’s favour after Waite’s team led 18–6 after 57 minutes. Both games drew more than 100,000 fans to Sydney’s new Olympic Stadium.

For much of the next decade, the Dragons often seemed on the verge of another outstanding era, without ever reaching a grand final. The club appeared in seven finals series out of 10 between 2000 and 2009, and provided a bevy of representative talent — led by Barrett (who was the Dally M player of the year in 2000 and Dragons captain from 2001 to 2006), centres Matt Cooper and Mark Gasnier, utility backs Ben Hornby and Shaun Timmins, second rower Ben Creagh and props Luke Bailey and Jason Ryles. But the team was often frustratingly hot and cold. In 2000, they lost 50–4 to North Queensland and a week later thrashed the Auckland Warriors 54–0, winger Amos Roberts scoring a record 22 points on debut. Perhaps the most exciting win of this period occurred in 2004, when the Dragons scored 26 unanswered points in the last 23 minutes against Manly at Kogarah to win 36–34. A year later, they went into the second preliminary final against Wests Tigers as hot favourites but lost 20–12.

Nathan Brown, who played hooker with distinction for the Dragons for eight years, appearing in three grand finals in the 1990s, was coach from 2003 to 2008, following Waite (1996–2000) and Andrew Farrer (2000–02). But early in Brown’s last season the club announced they had signed the six-time premiership winning coach Wayne Bennett on a three-year deal, starting in 2009.

‘I would have loved to have had my contract extended here at the Dragons, but I understand and accept the decision, Brown said. ‘Coaches with the experience and success of Wayne Bennett don’t come around very often.’

Brown’s team started slowly in 2008, winning just one their first six games to sit 15th on the ladder. But he made a crucial change, switching Hornby from fullback to halfback, and Jamie Soward from half to five-eighth, and the team promptly won eight of nine games, including seven in a row, to move to fifth. The season’s eventual grand finalists, Manly and Melbourne, were beaten in successive weeks. Though the Dragons went out in the first week of the finals, and Gasnier and Ryles left for France, to play rugby union and for Catalans in the Super League respectively, Bennett was handed plenty to work with. The new men in the squad — fullback Darius Boyd, hooker Nathan Fien and forwards Michael Weyman, Jeremy Smith and Neville Costigan — would make a significant impact.

‘The Dragons, great club,’ wrote Bennett in his book, The Man in the Mirror,

which recalls his first 21-year stint as Broncos coach and the negotiations that took him to St George Illawarra.

‘When I was young I dreamed of coaching there, long before the premiership expanded into Brisbane.’

His influence was immediate: the team seemed fitter than any other in the competition, and played with a new-found confidence and consistency. Soward broke Harry Bath’s record for most points in a season and neither he, nor Hornby, whom Bennett named captain, missed a game. Five Saints appeared in State of Origin, the team drew record home crowds, and the club won the minor premiership and the club championship. But after winning 16 of their first 20 games, they won only one of their last six, to miss the grand final by a fortnight.

Bennett made sure there was no late-season fadeout in 2010. Instead, the team won four of their last five home-and-away games (to top the ladder for the second year straight, the first Dragons side to do so since 1966–67) and then a qualifying final, preliminary final and the Grand Final, 32–8, to earn a 16th premiership. Hornby, from Corrimal JRLFC, became the first back since Johnny Hawke to captain the Dragons to a premiership. Winger Jason Nightingale, a New Zealand Test player but a product of Renown United, scored two tries, and Boyd, a Brisbane import, won the Clive Churchill Medal. The team also featured three famous St George names: Dean Young and Brett Morris matched the feat of their fathers, Craig Young and Steve Morris, who were in the previous Dragons team to win a grand final; and Mark Gasnier, who returned to the team in July, won a premiership to go with the eight that Reg Gasnier, his uncle, so famously won between 1959 and 1966.

‘He’s been one of our best performers all year and tonight was what I expect from him and what he expects from himself. But teams win grand finals, individuals don’t. And a team won here tonight.’

Bennett’s third and final year started brilliantly, as the team claimed the World Club Championship in England, beating Wigan 21–15, and then won nine straight to be four points clear on the top of the table at the end of May. But after eight Dragons — Boyd, Morris, Gasnier, Soward, Young, Creagh, Beau Scott and Trent Merrin — played in game one of the Origin series, a decline set in that was never truly arrested. The team finished fifth and then lost successive finals matches, though the 13–12 loss to the Broncos in the elimination final in Brisbane was a heroic effort, the game staying in the balance to the last minute.

The years since 2011, under coaches Steve Price (2012–14) and Paul McGregor (2014 to the present) have been relatively lean, with finals appearances in 2015 and 2018. The decade was marked, though, by the achievements of three great clubmen. In 2018, Nightingale retired having made 266 first-grade appearances, and as one of just five men — next to Graeme Langlands, Reg Gasnier, Johnny Raper and Ken Kearney — to appear in more than 30 Test matches as a Saint. Two years earlier, Creagh, a four-time St George Illawarra player of the year and captain in 70 matches from 2013 to 2016, played his 270th and final game. And back in 2012, Hornby surpassed Norm Provan’s record for most first-grade games by a footballer wearing the Red V and finished with 273 matches, which remains the Dragons record for most premiership appearances.

Bennett, as influential a coach as any of the Red V legends who preceded him, knew Ben Hornby’s rare value as well as anyone.

‘Everything he does,’ he said of his captain, ‘is for the team.’