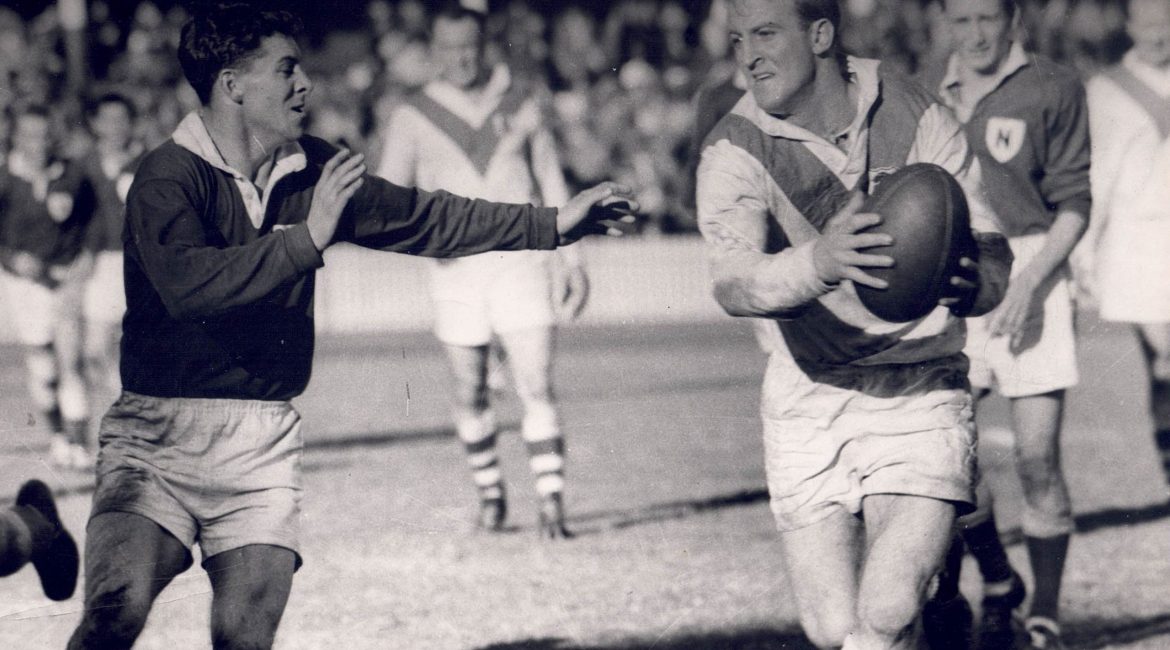 Alex Mackie, former St George football club president and St George Leagues Club chairman, might have best described Raper the footballer when in 1987 he called him ‘the supreme all-rounder’. Several famous players over the years have possessed many of the traits that make for a truly great footballer. They were superb not just at one thing that separates the champion from the good player, but several. None did this as magnificently or for as long as did Johnny Raper.

In the past six decades, since Raper emerged as a prodigiously talented lock with Newtown (1957–58) and then St George, Raper’s awesome football ability and achievements have been recalled with a sense of awe by those who saw him play. The much respected broadcaster Frank Hyde, for example, said a player like Raper ‘comes along once every century’ and compared his defence to ‘a shark homing in on a mackerel’. Reg Gasnier claimed Raper was ‘the greatest footballer I played with or against’. Said five-time premiership-winning coach Jack Gibson: ‘There was an intensity about him. Nobody trained like he did.’

‘Johnny Raper is the greatest footballer I have seen in the rugby codes,’ said the dual international and TV commentator Rex Mossop. ‘Throughout his long and magnificent career, Raper maintained a fitness level and work rate that would have killed a lesser mortal.’

‘John Raper was a complete footballer,’ said Clive Churchill. ‘He could create an opening with his cleverness around the rucks, and just as quickly close one to the opposition with his cover defence.’

He played 11 seasons with St George, 1959 to 1969, and won the premiership in each of his first eight seasons at Kogarah. He captained the club in 1968 and 1969 and serving as captain-coach in 1969. He played 39 Tests for Australia, went on three Kangaroo tours, was the victorious Australian captain at the 1968 World Cup and wore the blue of NSW on 31 occasions. He was the NSW Rugby League’s official player of the year for 1960 and 1964, and the Sun-Herald’s footballer of the year, as the Sydney premiership’s best player, in 1960, 1963 and 1967. He left the Dragons on good terms to play and coach for five seasons in the Newcastle competition. He coached Cronulla and Newtown in the NSW Rugby league premiership

In 1981, Rugby League Week established an elite panel to nominate the game’s ‘Immortals’, essentially Australian rugby league’s four standout players since World War II. Raper was named alongside Gasnier, Clive Churchill and Bob Fulton. In 2008, Raper was selected as lock in Australia’s ‘Team of the Century’.

He was a much loved figure in rugby league, with a reputation as a bit of a rogue, and an ability to mix with all classes of people. Few if any famous footballers have loved the game more. ‘There are two of him,’ wrote his wife Caryl of the league legend she cared for dearly as his health declined in recent times. ‘There is the wild man out there, and then there is the other man at home — a person who is loving and caring and does such incredible things that it knocks your socks off.’

“Johnny Raper was an inspiration to his teammates and the entire St George organisation and is one of the key reasons why the famous Red V holds such esteem to this very day,” St George Illawarra and St George District chairman Craig Young said.

“Johnny was a larger than life character on and off the field who loved the game dearly. He will be sadly missed and never forgotten.

“Everyone involved with St George District and the St George Illawarra Dragons send their condolences to the Raper family.”