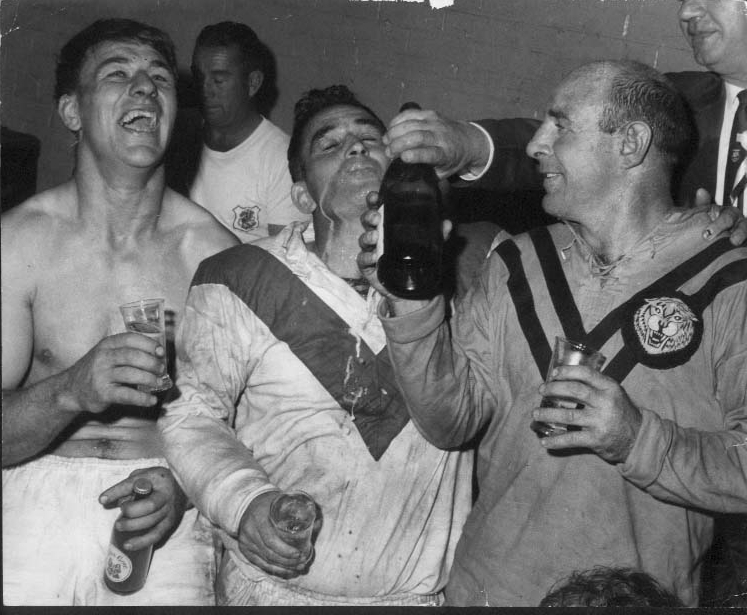 From the start of his football career, Huddart seemed destined for greatness. In a preview of the 1958 Great Britain rugby tour of Australia, the Sun-Herald wrote: ‘Dick Huddart’s midfield bursts will thrill Sydney fans. He is a fitter in a Cumbrian coalmine, and off the football field is a straight-forward, fun loving youngster.’

The Herald could not have known just how much Huddart would thrill Sydney and especially St George supporters.

Huddart made his Test debut in the second match of the 1958 Ashes series, playing a leading role in a 25–18 victory famous for the heroic performance by Great Britain captain Alec Prescott, who completed the game despite breaking his right forearm in the third minute. Two weeks later, the Lions dominated the third Test by 40 points to 17, and Huddart was well on the way to being recognised as the best running second-rower in the world.

Huddart shifted from Whitehaven to St Helens on a big-money transfer after the ’58 tour. He would play 209 games for the Saints and claim the Lance Todd Trophy as the best player in their 1961 Challenge Cup final victory over Wigan. He was a star of the Great Britain team that so decisively won the 1962 Ashes series in Australia, a combination Australian Rugby League chairman Bill Buckley described as ‘the finest touring side I have seen’. The great commentator Frank Hyde would recall years later how local fans ‘marvelled at the guile of front rower Brian McTigue sending the fleet-footed Dick Huddart through gaps around the rucks to the delight of the spectators and the chagrin of the Australians’.

Huddart was superb throughout that tour, and especially in the game against St George that was played in the week after the third Test. Saints had won the previous six Sydney premierships, but were no match for the Lions, who won 33–5 before a midweek record SCG crowd of 57,744. The Dragons had an immensely powerful pack, featuring famous names such as Norm Provan, Kevin Ryan, Billy Wilson, Elton Rasmussen and Johnny Raper, but they didn’t have a running forward as damaging as Dick Huddart.

By 1963, Huddart was contemplating migrating to Australia with his family. ‘I would go to Australia like a shot if I got the chance,’ he told the Lancashire Evening Post in October of that year. ‘My wife and I intend going there anyway when I finish playing. But it would be better if I could go there as a player.’ When the subject came up in conversations with Johnny Raper and Ian Walsh, two Saints men who were touring with the Kangaroos (and who knew from experience just how devastating a footballer Huddart could be), they advised him to make no commitments until they had spoken with St George secretary Frank Facer. By Christmas, the Daily Sketch, a Manchester tabloid, was reporting confidently that ‘Dick Huddart will migrate to Australia at the end of the current English season.’ He had only played in one Test in the recent Ashes series in England: the third, Great Britain’s only victory, when he was ‘head and shoulders above any other forward’ on the field according to the London Sunday Telegraph. By any measure, it would be a coup for a Sydney club to sign such a player.

St Helens set the transfer fee at £20,000 sterling (£A25,000). Facer haggled that down to £A12,500. The move received the all-clear in late March. Because the birth of the Huddarts’ third child was imminent, their arrival in Australia was delayed until mid-May. The response in Australia to his transfer fee was a mixture of wonder and disbelief. One rival official described the deal as ‘staggering’. When 12,000 fans turned up at Kogarah for Huddart’s Dragons debut — in a non-premiership ‘State Championship’ match against Riverina — Saints considered him a bargain. Before he arrived, some of his new teammates, including Norm Provan, expressed some opposition to the move, arguing that the club already had plenty of forward power, but Facer placated them by explaining that it was better that Huddart run with them than against them. The big Englishman would take Elton Rasmussen’s place in the second row and enjoy an outstanding first season, playing in every game until he hurt his knee in the major semi-final, which forced him out of the grand final.

Huddart’s Dragons career would continue until 1968. He had his problems with injuries, especially in 1965 when he missed the famous 12–8 win over Souths in front of 78,056 fans at the SCG. But at other times, he was magnificent, especially in 1966 when he didn’t miss a game.

‘Englishman Dick Huddart had his best game of the season,’ wrote Tom Goodman in the Sun-Herald after the ’66 grand final, won 23–4 over Balmain, the 11th straight premiership. ‘He is a classical runner with ball, with one hand free to fend off an opponent. He scored a try by running off [Ian] Walsh and finding a gap, in a manner reminiscent of his efforts in Tests against Australia.’

Huddart was in the Dragons second row for the finals matches in his last two seasons at Kogarah. When injury threatened his place for the minor semi-final against Easts in 1968, Alan Clarkson in the Herald reported that coach Norm Provan had ‘gone into bat’ for the Englishman to play, and Huddart responded with a stirring display, scoring the opening try. The preliminary final loss to Souths a fortnight later was his Dragons farewell. He then coached at Dubbo in western NSW and after retiring lived at different times in Australia and England.