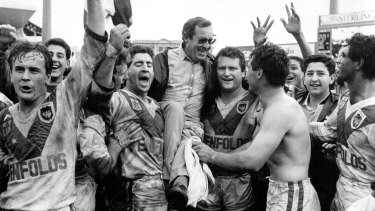 St George officials had no doubt Roy Masters was the right coach to succeed the retiring Harry Bath. They were extremely impressed with what Masters had done at Western Suburbs, taking the Magpies to the semi-finals four years in a row despite seeing many of their best players depart year after year for richer clubs. The deal was done within a week of Saints ending 1981 in eighth position. Big things were expected.

For a season and a half, the results were disappointing. In 1982, with the Canberra Raiders and Illawarra Steelers making their premiership debut, St George finished tenth; never before had a season finished with nine teams ahead of Saints on the ladder. For ’83, the club signed the great Steve Rogers from Cronulla, Wallabies centre Michael O’Connor, lock Graeme O’Grady from Newtown and winger Steve Gearin from Canterbury, but after winning four of their opening five games, Masters’ team won only five of their next 16. Young, Reddy and Rogers were reportedly all out of the season. The nadir was a 47–12 home loss to Easts in round 21, the first time a Dragons team conceded more than 35 points in a first-grade game at Kogarah.

At this point, Saints languished in eighth place, seven points out of the top five. Masters turned to the ‘old guard’, bringing back John Jansen as prop and captain and restoring Robert Stone and Graeme Wynn to the side. St George won their next seven games, including a 32–2 annihilation of two-time premiers Parramatta at Kogarah in the final round, a 44–16 defeat of Easts in a playoff for fifth place, and a 17–14 victory in extra time over Balmain in the minor preliminary semi-final.

‘We were playing for each other,’ recalled Jansen. ‘And we’d recaptured the spirit of past glories.’

The minor semi-final, lost 26–24 to Canterbury, was a game the Dragons could easily have won.

For much of the next two years, St George were the finest team in the competition. The character and depth of talent in the organisation was again the envy of other clubs. In 1984, with Young and Rogers both out for extended periods and Jansen having retired, Stone proved an inspiring captain. A highlight came in late June, when the Dragons came back from 10–4 down at half-time to beat Souths at Redfern Oval, even though they were backing up after a midweek National Panasonic Cup win over Norths and despite having their skipper sent off after 29 minutes (he was later cautioned at the judiciary, in a time of lengthy suspensions) and fullback Brian Johnson being given ten minutes in the sin bin on the hour.

‘In the history of courageous performances by the mighty St George club, [this] effort ranks as one of their finest displays of determined, disciplined football,’

But the season ended a week early, after arguably the most frustrating defeat in club history, akin to the 1946 Grand Final, in the preliminary final against Parramatta. Rogers had his best game in the Red V and despite an 11–5 penalty count against them, Saints led 7–4 with time almost up when the Eels’ Test winger Eric Grothe scored in the Bradman Stand corner. Twelve months later, St George entered the first-grade Grand Final as strong favourites, only to lose 7–6 to Canterbury, coached by the enigmatic Warren Ryan, who had played lower grades, and one first-grade match, for St George in the ’60s. Saints thus missed the chance to match the achievement of 1963, when the club won the grand final in all three grades. Rookie five-eighth Steve Linnane was the competition’s leading tryscorer. Young, the Dragons captain and Dally M prop of the year, had a mighty season; he, Graeme Wynn and Steve Morris were the three survivors from the 1979 premiership-winning side.

As Jack Gibson had done when St George reached all three grand finals in 1971, Masters opted not to have fresh reserves on call 14 years later. ‘We’ve operated throughout the year on a club basis,’ he said. ‘The under-23s have stimulated second-grade to win and likewise they have done the same for firsts. I wouldn’t want to deprive any player of the chance to turn out in a premiership side.’

In 1986, a decision to move home games from Kogarah Oval to the SCG backfired and St George finished the season with a loss to Canterbury and draw with Canberra to miss a playoff for fifth place by a point. Saints did not feature in the semi-finals in any grade for the first time in 50 years. Soon after, O’Connor, who during the year became the club’s fifth dual international — after Herb Gilbert, Ken Kearney, Kevin Ryan and Phil Hawthorne — announced he was signing with Manly. Morris, halfback Perry Haddock, hooker Chris Guider and second rower Chris Walsh also departed, leaving the club in need of a major rebuild. The scale of that operation became clear in the first nine rounds of 1987, when the team lost six games straight and found themselves at the foot of the ladder, but Masters and Young forged a revival, with nine wins and a draw in their last 16 games. In late June, it was announced that Ted Glossop — who had played for Saints in the 1950s, mostly in the lower grades, before establishing his coaching reputation at Cronulla and Canterbury — would replace the retiring Masters for 1988, and the side promptly beat competition high-flyers Easts on the following Sunday.

The season ended with an emotional 16–14 defeat of Canterbury, which cost the Bulldogs a semi-final berth and left the Dragons five points adrift of the top five. Critics noted that the game involved the two coaches from the 1985 Grand Final. Masters led his team onto the field before the game. Afterwards, he quipped:

‘If you’re only as good as your last win, then I’m feeling pretty good.’