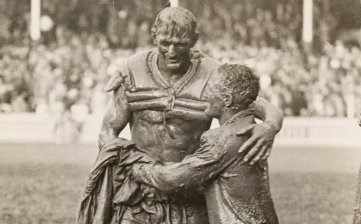 In early March 1950, The St George Call included this succinct report in its story about a trial against North Sydney:

‘N. Provan, front row forward, is a bright prospect. Never away from the ball, he displayed pleasing form.’

Norm Provan was a lanky, raw-boned, 17-year-old forward who was born in the Riverina, raised in North Sydney and then at Sutherland, and had trialled unsuccessfully with Easts. He played in the lower grades in his first year at Saints, but was in the firsts for the start of 1951 and would remain there for 15 seasons.

Provan stood 6ft 4in (193cm), weighed 15 stone (95kg) in his pomp, but his command of the game and influence at St George went well beyond his physique. Saints never missed the finals in his 15 years of first grade and won the grand final in each of his last 10. He was captain-coach from 1962 to 1965, overseeing the arrival at the club of Billy Smith and Graeme Langlands, and the last image of him as a player is of a colossus striding through the mass of fans that had invaded the SCG after the 12–8 win over Souths. A crowd of 78,056 was at the SCG that day. He appeared in 18 Tests and would have played more but for ill-timed injuries in 1955 and 1956 and his decision to step back from touring in 1959. He was a star of Australia’s triumphs in the 1954 Ashes series and the 1957 World Cup, but it was his efforts for St George that forged the legend. In March 1963, he was the first active player to be made a life member of the club.

Provan was picked for Probables to play Possibles in a major selection trial after just eight first-grade matches. The Daily Telegraph called him

‘the find of the season’

and a year later the Sunday Herald judges rated him the

By 1954, excellence was expected from him. After a thrilling 15–14 semi-final win over Norths, Horrie Maher in The St George Call wrote: ‘Norm Provan was, as usual, in grand form.’ The Herald judged him the footballer of the year. Provan played his 100th club game in 1955 and was rated by Truth’s Jim Mathers as the best forward in the ’56 Grand Final, when St George were forced to play with a five-man pack after centre Merv Lees was injured.

Provan was consistently superb in St George’s grand final wins, especially in the early years of the streak when he was at the absolute peak of his powers. The Sunday Telegraph’s George Crawford wrote of 1956:

‘Provan played like a demon. He tore his way through rucks, while his cover defence in the absence of a lock was unforgettable.’

‘Big Norm Provan gate-crashed through the rucks like a bulldozer.’

The Sun-Herald’s Tom Goodman on the same game:

‘Lanky second rower Norm Provan was magnificent yesterday, whether hurling himself into tackles or breaking through and, once in the open, setting off with loping strides.’

‘Norm Provan was the hero, as apart from his two tries he was a tower of strength in cover defence.’

A year later, Crawford reckoned that

‘the Provan brothers (Peter and Norman) and winger Ed Lumsden were the stars of the match.’

Provan played his 206th grade game in August 1961, breaking Len Kelly’s club record. In 1962, Saints were again minor premiers and beat Newtown 30–9 in the major semi-final, but during the year they had been thrashed 33–5 by Great Britain in front of a crowd of 57,744, a record for a midweek event at the SCG, and then on grand final day Provan was knocked out in the first half and Billy Wilson was sent off immediately after halftime. But the captain-coach came back to inspire his men to a famous 9–6 win. A year later, when the Dragons prevailed 8–3 and many thought he was again the grand final’s best player, photographer John O’Gready snapped the iconic image of the mud-clad Provan and Magpies captain Arthur Summons that became known as ‘The Gladiators’.

He threatened to retire more than once, but always ‘did a Melba’ until he finally called it quits in 1965. His second last game was a 47–7 thrashing of Norths in the major semi-final, after which Rugby League News reported:

‘Big Norm on Saturday was all over the field and appeared to be in every movement. He handled in at least six try movements as well as scoring one himself. St George officials cannot recall a better display.’

With Ian Walsh as captain-coach, Saints won the competition again in 1966 (beating Balmain 23–4 in the Grand Final) and were minor premiers a year later, but lost to Souths in the major semi-final and Canterbury, led by former Saints star forward Kevin Ryan, in the preliminary final. Provan was a non-playing coach at St George in 1968, and later at Parramatta and Cronulla. In 2018, he became a rugby league Immortal.

He was helped at St George, of course, by the extraordinary depth of talent around him. Some of the individual feats were prodigious: Johnny King scored at least one try in six straight grand finals; Gasnier scored four tries in a first-grade match on four occasions and nine hat-tricks; Langlands produced an epic performance in the ’64 Grand Final, when he set up the game’s only try and kicked four pressure goals in an 11–6 win over Balmain. It seemed that whenever a great player approached the end of his career from 1956 to 1966, another champion emerged, either from the district, via astute scouting, or by Frank Facer outbidding other clubs, his bank boosted by the burgeoning St George Leagues Club. Harry Bath was thought to be over the hill when Facer and Kearney signed him after he returned from the UK in 1957. Johnny Raper was convinced to come over from Newtown two years later. Gasnier, King, Bob Bugden, Tommy Ryan, Billy Wilson, Johnny Riley, Billy Smith and Bruce Pollard were among a posse of local juniors who starred during the 11 years. Langlands, Brian Clay, Eddie Lumsden, Brian Graham, Robin Gourley and Barry Beath played representative football from country clubs before signing with Saints. Ian Walsh, Elton Rasmussen and Englishmen Dick Huddart arrived at the club as proven Test players. Kevin Ryan and George Evans came from rugby union.

‘the greatest rugby league player I played with or against.’

Ray Norman, once a Test player and one of the great students of rugby league, said:

‘There are a few players who have been really outstanding in this great game. They have had something which has lifted them above other very good players. Harold Horder was one, Frank Burge was really great and so was Duncan Thompson. Herb Narvo was a magnificent footballer too, because he was never caught in possession when he could pass … Provan, with his long raking strides and intelligent, powerful football, ranks with the best forwards we have had.’

Ray Norman made those comments in 1958. At that point, Norm Provan was only halfway through his extraordinary, unrivalled rugby league career.