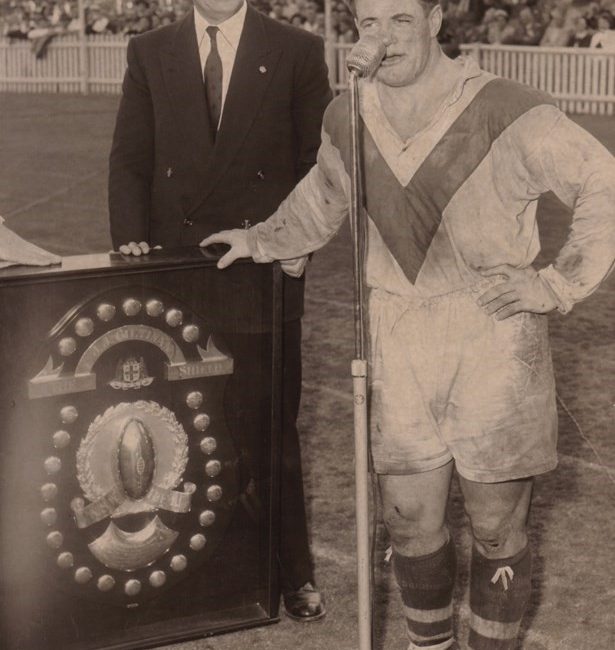 Of all the men who helped build the legend of the St George Dragons, it is doubtful if any imposed a greater influence than Ken ‘Killer’ Kearney. He remains a giant figure in the Saints story, the genius behind the enterprise that claimed a remarkable 11 straight premierships.

Kearney’s career began in the early 1940s at the Parramatta rugby union club, where he played first grade at 17, but soon he was serving in Europe with the RAAF. He stayed in rugby when he returned to Australia, playing for NSW in 1946 and a year later toured England, Ireland, France and Canada with the Wallabies, but at the end of that tour he signed a £2000 contract with Leeds rugby league club. When he returned to Australia three years later, he had built an extraordinary bank of league knowledge. The first beneficiaries were St George, whom he joined for the 1952 season.

His impact was immediate. On paper, Saints’ were far weaker than the great side of 1949. Doug McRitchie, Jack Munn, Ron Roberts, Noel Hill and Frank Facer had retired or were now coaching in the bush. Test lock Noel Mulligan, who played at Kogarah in 1950 and 1951, also departed. Matt McCoy quit after just four games. But Kearney won the scrums, in the words of The St George Call, with ‘monotonous regularity’, and he gave Johnny Hawke strong support in educating rising Saints forwards such as Norm Provan, Billy Wilson, Harry Melville and Bob Bower. This latter contribution meant that, even though he, Noel Pidding and dynamic young three-quarter Tommy Ryan left mid-season for England with the Kangaroos, Saints were still able to win seven games straight leading into that year’s finals. Kearney made his international rugby league debut in the third Test in England, and dominated the scrums as Australia won 27–7. He’d remain the Test hooker until 1958.

In 1953, Kearney was the most influential member of a young Saints line-up that surprised by reaching the final against Souths. For the next two seasons he was captain-coach, steering his men into the final four on both occasions. But there were concerns over his relationship with referees and the many penalties the team conceded, and Norm Tipping, who had coached the side in 1953, took the role again, with Kearney remaining skipper. This move, by any angle was a huge success, as the Dragons claimed their third premiership, but Tipping’s relationship with new secretary Frank Facer soured and Kearney reclaimed the captain-coach role for 1957. With Facer his firm ally, he put his stamp on a premiership club as perhaps no other coach has ever done, before or since. Wilson stated flatly:

‘He must get a great deal of credit for setting up the pattern of success.’

Monty Porter, one of the young forwards who flourished under his tutelage, called him

‘Apart from his undoubted hooking skill, he also is a clever player is the loose and is mobile enough to keep up with any forward move,’

‘As a dummy half, he is without peer,’

said Clive Churchill after the 1956 grand final. Kearney’s ability to read a game was legendary; though his head was constantly wedged in scrums, he was aware of everything that happened on the field. It was said he never lost a scrum that really mattered. Kearney could be ruthless, undiplomatic with referees, and his St George teams were sometimes criticised for unduly rough play. His Saints teams never finished on the right side of a penalty count in a grand final.

Here’s how his grand finals played out:

1957: Lock Brian Clay scored two tries as Manly were vanquished 31–9. Harry Bath’s eight goals and 16 points remain the records for most goals and points in a grand final.

1958: St George out-muscled Wests 20–9, but were criticised in some quarters as a dour ‘basher gang’. Frank Facer countered by pointing out that in the three rounds before the semi-finals, Saints scored 30 tries. ‘They play football to win,’ he said.

1960: A 31–6 defeat of Easts gives Kearney a fifth grand final win as captain, a record that still stands.

Kearney got his team fitter than any other, revolutionising the way teams prepared in the lead-up to a season and from week to week. He insisted on an unprecedented level of professionalism, and no one — not even Johnny Raper or Reg Gasnier, two future Immortals who arrived at Kogarah in 1959 — was immune from criticism if standards dropped, even fractionally. He was also tough and extremely durable. He played the last month of the 1956 season with a bad shoulder that needed a painkilling injection to get him on the field every Saturday, and he cracked his jaw during Australia’s first game in their successful 1957 World Cup campaign, but kept going all the way to grand final day. He didn’t miss a game in 1959 or 1960, when he was 35 and 36, but knee and calf injuries restricted him to just four games as Saints won a record sixth consecutive premiership in 1961, his last season at Kogarah. He strove gallantly to get back on the field for the finals, but it wasn’t to be. Later, he coached at Parramatta and Cronulla. Six men who played under him went on to coach a grand final-winning side.