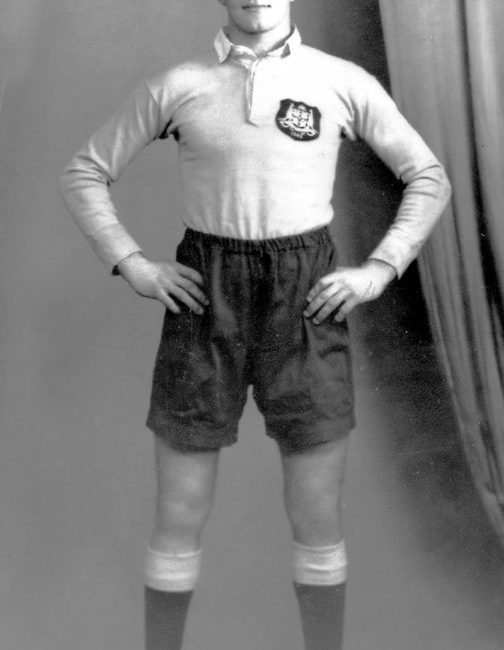 After making the top four every year from 1939 to 1944, Saints crashed to second last in 1945. Club officials responded by appointing the former Test forward and Australian heavyweight boxing champion, Herb Narvo, as captain coach. The side was also bolstered by the return of a number of fine players from war service, including the Lindwall brothers, Jack and Ray, giant forward Jack Munn and the outstanding centre Doug McRitchie. Narvo quickly moved the highly popular Walter Mussing from the wing to lock forward, with immediate results. Max Hayward, a tough Queenslander who quickly became known as the ‘mighty atom’, was brought in at halfback.

On 6 April 1946, Narvo defended his heavyweight title against Jack Johnson at Sydney Stadium and was knocked out in the fifth round. The next day, he led St George in their final trial, against Canterbury at Belmore.

‘He did not appear any the worse for his “ordeal” and smartly opened the scoring in the first few minutes with a grand try,’

‘Herb Narvo has given the game in this district a remarkable fillip,’

‘It would be hard to find a more popular leader than Herb Narvo, who has the complete confidence of his teammates,’

‘the methods that Narvo introduced to get his players into the best possible physical condition’.

St George won 10 of their last 11 home-and-away games in 1946, to claim their first clear-cut first-grade minor premiership (they had finished equal top with Easts in 1928). However, they lost the semi-final 22–14 to Balmain and then were desperately unlucky in the grand final against the Tigers, scoring four tries to three but losing 13–12. Narvo then accepted a big offer to coach at Cootamundra, where he also ran a local pub, while Saints just the 1947 finals, losing a playoff for fourth spot to Wests. For 1948, the former Balmain five-eighth Jim Duckworth was appointed coach and he guided his team to the final, where Saints lost 13–12 to his old club. St George signed Johnny Hawke, a star as a centre and five-eighth on the just completed Kangaroo tour, prior to the start of the 1949 season and invited him to also coach the first-grade side. Hawke declined and Duckworth then beat Frank Burge and Norm Tipping for the job. Tipping, a former Saints fullback, remained coach of the reserves.

Duckworth had much to work with, but for most of the season a mix of injuries, suspensions and representative commitments meant the side was rarely at full-strength. Even so, Saints were still top of the ladder a month from the finals, but three losses and a draw pushed them back to third. However, the XIII that met Souths in the semi-final, with Hawke back from a dislocated shoulder and Munn restored to full health after battles with concussion and malaria, was one of the best the club ever put on the field. The three-quarter line of Noel Pidding, Matt McCoy, Dough McRitchie and Ron Roberts all played for Australia. Jack ‘Dutchy’ Holland was rated the best prop in the country. Hooker Frank Facer was as tough as they come. Halfback Noel Hill finished third in the Sunday Herald’s player of the year competition.

There was no question, though, as to their most important player.

‘Hawke is undoubtedly our key man,’

The Saints captain’s epic performance in the semi-final win over the Rabbitohs, when his shoulder clearly worried him and he had to leave the field with a suspected broken jaw but returned to inspire a famous comeback, was the stuff of legend. Fortunately, the fracture in his upper jaw was only minor; he lost two teeth but was able to play superbly in the final against Balmain and grand final rematch against Souths.

‘St George’s win [in the final] was the result of a masterpiece of tactics by its five-eighth and captain, international Johnny Hawke,’

‘Hawke dictated the trend of play throughout the match.’

‘The genius of Kangaroo five-eighth Johnny Hawke was apparent in the successful direction of St. George’s backline moves. That wingers Ron Roberts and Noel Pidding each gained two tries was evidence of the constructive manner in which Hawke created openings.’ Goodman called Hawke ‘a quick-thinking leader who always knew what was demanded’.

Hawke went into the 1950 season as the biggest star in Australian rugby league. His face appeared in advertisements in Sydney newspapers and Rugby League News. The Sydney Morning Herald called him

‘the logical captain of Australia’.

When doctors ruled him unavailable of the first two Tests with a knee injury before the Australian team was announced, the Daily Advertiser in Wagga headlined its story ‘Australian Captain Johnny Hawke Out’. Duckworth was still Saints coach — you could hardly sack a premiership winner — but with Hawke and McCoy out for half the season, the team missed the semi-finals.

Hawke became St George’s captain-coach in 1951, but he was never quite the same star player as he had been before his injury — as well as ongoing knee problems he was also laid low by a nagging back. But his influence at Kogarah Oval, St George’s home ground from 1950, was still profound. In 1951, he was close to his commanding best when St George demolished Souths 35–8 in a semi-final, and a week later, when Saints were surprised by Manly, ending their season, his duel with another great five-eighth, Wally O’Connell, was, according to The Sunday Telegraph

‘as good as anything seen at the SCG since the war’.

A year later, when St George finished second on the ladder but were beaten in a semi-final by Norths, the Telegraph’s George Crawford ranked Hawke as the best captain in the competition. It was his last year with the club. As had been the case in 1941, the turnover of players after the 1949 premiership was severe; only Pidding, known as the ‘Bradman of League’ because of pointscoring feats, played for St George in both the ’49 Grand Final and the loss to Souths in the premiership final in 1953. But the foundations constructed by Frank Burge and strengthened by Neville Smith, Herb Narvo, Jim Duckworth and Johnny Hawke were now entrenched. St George was about to begin the greatest run of sustained excellence in rugby league history.