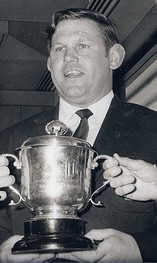 In the decade that followed the 11 premierships, St George were coached by a number of club icons: Ian Walsh (1966–67), Norm Provan (1968), Johnny Raper (1969) and Graeme Langlands (1972–76). The only time the club went against this formula was in 1970–71, when Jack Gibson, who had played for Easts, Newtown and Wests and coached Easts from the last to fourth in 1967, was appointed. But even Gibson had a link with the Dragons, as he had played a few third-grade games with the club as a 21-year-old in 1950. His two years as first-grade coach resulted in a defeat to Manly in the preliminary in his first year and an unlucky 16–10 loss to Souths in the 1971 Grand Final.

But for the lack of a premiership, this would be recalled as a golden era for the club. St George missed the finals only once in these 10 years, in 1974 when injuries ravaged the first-grade squad. The Australian squad for the 1968 World Cup featured seven Dragons — skipper Johnny Raper, Tony Branson, Graeme Langlands, Johnny King, Elton Rasmussen, Billy Smith and John Wittenberg — plus former Saints players Brian James and Johnny Greaves. The coach was Harry Bath, who had mentored St George’s reserves after he retired following the 1959 Grand Final, and then steered Balmain to the last Saturday of the season in 1964 and 1966. Raper, Langlands, Smith and Phil Hawthorne all captained Australia, as Kearney, Gasnier and Walsh had done before them. King retired as the Dragons’ all-time leading tryscorer, a record he still holds. Smith confirmed his status as Saints’ best ever halfback, better even than Alby McAndrew and Bobby Bugden, with one of his greatest days coming in the 1971 preliminary final, when he and Langlands inspired a stunning 15–12 victory over premiership favourites Manly. In 1975, two superb defensive efforts in semi-finals against the Sea Eagles and then Easts took the club into the Grand Final, but Langlands was well below his best after a pain-killing injection went wrong, star centre Ted Goodwin broke a cheekbone, and a great Roosters side ran away to a record-breaking 38–0 win.

For 1977, Saints looked to Bath, the ‘Old Fox’, who returned to the club he represented with distinction from 1957 to 1959. A ball-playing second-rower and prop, he had won premierships with Balmain in 1946–47 before spending a decade with Warrington in England. When he returned to Australia he initially had trouble finding a club, but then Saints’ Kangaroo prop Bryan Orrock broke his arm and Frank Facer and Ken Kearney moved quickly. Bath’s 16 points from eight goals in the 1957 Grand Final remains the record for most points scored in a premiership decider. He scored 225 points (108 goals and three tries) in 1958, a Dragons record for most points in a season until Jamie Soward tallied 234 points (12 tries, 90 goals and six field goals) in 2009.

‘Every man should make it easier for the guy beside him,’ was one of his mantras. ‘Make the ball do the work, not the body.’

He was a masterful football educator.

‘By watching him at work, I learned to use the ball myself,’ said Johnny Raper.

Frank Facer’s final signing for St George was Craig Young, who in 1977 under Bath grew from rookie to giant in a season.

‘He was a peerless forwards coach,’ Young recalls. ‘His two big points were constructive ball-playing that created space for supports, and aggression.’

Bath took charge of one of the youngest teams in Saints history, and transformed them into premiership material. Only two players, Smith and Barry Beath, both in their final season, had been on the field with the club in 1966. The highly popular Goodwin, now in his favourite position of fullback, had the best of his seven seasons at Kogarah. Lock Rod Reddy, who had missed the ’75 finals series because of injury, was the most influential forward in the competition. The average age of the pack — which also included second rowers John Jansen and Robert Stone, props Young and Bruce Starkey and hooker and captain Steve Edge — was 22 and a half. Edge, at 25 the oldest of the six, had been on the bench for the thirds on grand final day in 1971, when the club lost all three grades, and in the side walloped by Easts in 1975. He had become a respected ball-winner and one of the canniest of all Saints captains.

The final series of ’77 was a special one for Dragons fans. First Easts were beaten 19–14 in the major preliminary semi-final. Then minor premiers Parramatta fell 10–5 in the major semi-final, the key moment coming when Saints revived an old set-piece called ‘Billy’s ball’: Young sent tiny scrum half Mark Shulman through a gap and the little halfback drew opposition fullback Mark Levy and gave Goodwin a clear run to the line. Saints were unlucky on Grand Final day, when they led 9–0 but Shulman and Goodwin had to leave the field and the Eels came back to earn a draw. Not even 20 minutes of extra time could split the sides. A week later, however, the young Saints were explosive, careering away to win 22–0 in the premiership’s first Grand Final replay. A poignant moment came in the second half, when the injured Shulman, who had been gingerly keeping warm on the SCG No. 2 in case he was required, emerged from the Members Pavilion, to be greeted by an overwhelming roar from Saints fans as he walked to sit in front of Bath near the sideline.

Two years later, St George won a 15th premiership in commanding style, with a line-up significantly different to the ‘Bath’s Babes’ outfit of ’77. Shulman and Jansen had been forced out by injury, and Goodwin lost form, but their replacements, halfback Steve Morris, second rower Graeme Wynn and fullback Brian Johnson enjoyed magnificent debuts in the Red V. Young, now captain and unquestionably the best prop in the game, and Reddy were superb once more. Saints led 17–2 at halftime in the Grand Final against Canterbury, and settled for a comfortable 17–13 triumph.

Harry Bath thus became just the second man, after Souths’ Clive Churchill, to win multiple grand finals as a player and as a non-playing coach (a feat since matched by Manly’s Bob Fulton and Des Hasler). Though his teams of 1980 and 1981 would not reach the same glorious heights, his place in the Dragons pantheon was assured.