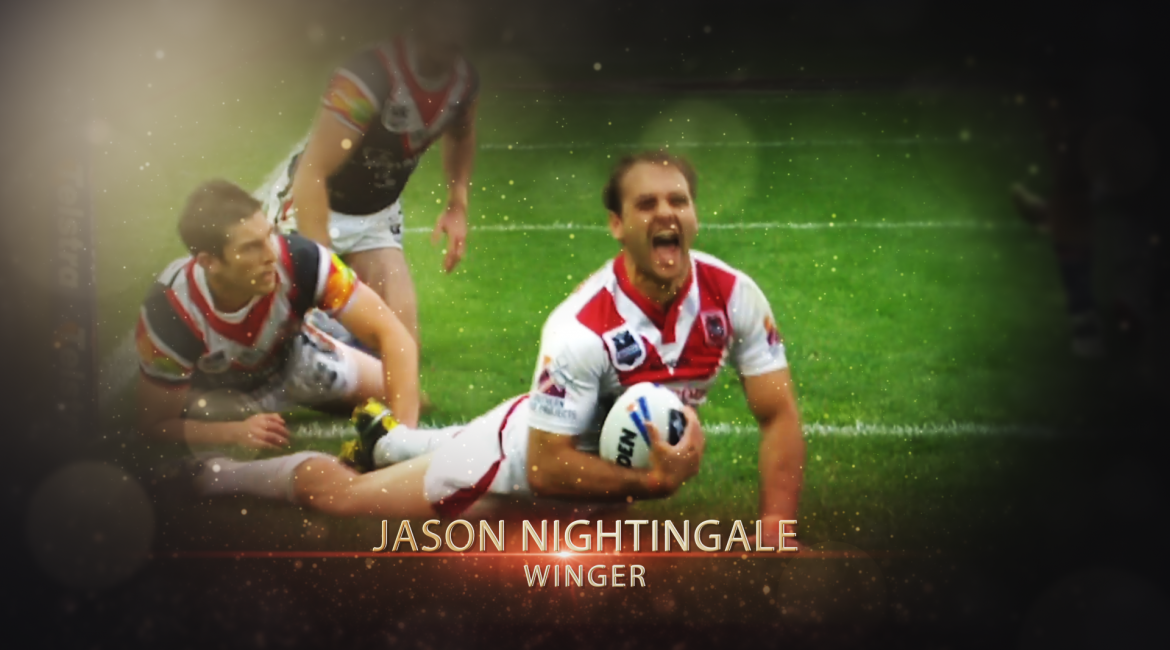 Nathan Blacklock was a remarkable try machine and scorer of one of the great Grand Final tries — his effort from fullback in 1999 when he gathered a kick through by Melbourne halfback Brett Kimmorley and exploded through players from both teams to race 60 metres and score under the posts. Originally from Tingha in the NSW Northern Tablelands, Blacklock broke Tommy Ryan’s 44-year-old Dragons tryscoring record when he crossed for 27 tries in 2001. He was a three-time Dally M winger of the year, 1999 to 2001, and scored 20 or more tries in a season every year from 1998 to 2001. For long periods in these seasons, it was rare for a game to be completed without him scoring at least one try. His final NRL try was his 100th for St George Illawarra, the first man to reach this milestone for the joint venture.

‘Yappy’ Gardner was a highly popular Saint who was compared to the great Cec Blinkhorn in his first season and to other great wingers of the 1920s, such as Harold Horder and Benny Wearing, as his reputation grew. Gardner scored a try in each of three games for NSW in 1933 and was the only St George man to make the 1933–34 Kangaroo tour, when he made his Test debut. Was Saints captain in 1935, his final season, and later coached lower grades.

A Hall of Fame winger famous for scoring at least one try in six straight Grand Finals, 1960 to 1965, Johnny King scored two tries in 1960, not long after his 18th birthday, and one in each of Saints’ next five triumphs. He was the only tryscorer in the 1962 and 1964 Grand Finals. His 143 tries in 191 first-grade games remains a Dragons record. King was the premiership’s leading tryscorer on two occasions, in 1961 (20 tries) and 1965 (15 tries), and Saints’ leading try scorer six times. He made his debut for NSW in 1962, against Great Britain, and was a reserve for the third Test, but did not play his first Test until 1966. He was a member of the 1967–68 Kangaroos, playing in all six Tests on tour, Australia’s 1968 World Cup squad, and appeared in all three Ashes Tests in 1970. In 1974, King coached the Western Division team that won the inaugural Amco Cup.

A centre from Arncliffe Scots who established himself in first grade in 1952, Ross Kite made his representative debut in 1954, for Sydney against Great Britain, and played for NSW later that season, scoring four tries in a 46–7 rout of Queensland. He earned his first Australian jumper a year later, playing in all three Tests against France and scoring a try in each of his first two internationals. Kite was Saints primary goalkicker in ’54, tallying 129 points from 13 tries and 45 goals. In 1956, he was picked for City Firsts, played his 100th game for St George and was in the Dragons team that won the grand final. In 1958, he switched to the Wagga Magpies, from where he played two Tests against Great Britain.

The first man to score 100 first-grade tries for St George, including 19 in 1940, then a Saints record for single season, Jack Lindwall was described in the early ’40s as ‘the greatest opportunist playing today’. He was the premiership’s leading tryscorer in 1940, 1942 and 1946. He appeared in two grand finals, in 1942 and 1946 (after missing the ’41 final because of illness), and scored a try in the first of them and two in the second. Lindwall scored 36 points in a 61–11 rout of Manly (six tries and nine goals) in 1947, a record for most tries in a first-grade match for St George that still stands and equalling Les Griffin’s Saints’ mark for most points in a first grade match.

St George’s 23–4 defeat of Balmain in 1966 was Eddie Lumsden’s ninth winning Grand Final (he missed 1960 because of injury). Lumsden joined Saints from Kurri Kurri in 1957, and quickly established himself in first grade even though the club was extremely well off for wingers, with Tommy Ryan, Kevin O’Brien and Ross Kite. He built an extraordinary tryscoring record in finals matches from 1957 to 1961, amassing 15 tries in 10 games, including hat-tricks in the 1959 and 1961 Grand Finals. Lumsden scored at least one try in nine of those 10 games. He was the premiership’s leading tryscorer in 1958 (18 tries in 19 games) and 1962 (21 tries in 17 games). In 1963, he scored his 100th first-grade try for the club a week before he played his 100th game. He twice scored three tries in a game in 1966, his final season, bringing his career hat-trick tally to 11.

A son of former Saints halfback and winger Steve Morris, and twin brother of Josh, Brett Morris made his first-grade debut in round 9 of 2006, at age 19. His first premiership try, scored six weeks later, was a spectacular effort that gave the Dragons a dramatic late victory over Brisbane at Suncorp Stadium. A shoulder injury slowed his progress, but in 2009 Morris established himself as one of the best wingers in the game, scoring 25 tries in 24 matches and making his Test debut in the end-of-season Four Nations, scoring six tries in four Tests. He would finish his Test career with 23 tries in 18 Tests, was St George Illawarra’s leading tryscorer for the season on four occasions, and played in the St George Illawarra team that won the 2010 Grand Final and the 2011 World Club Challenge.

In 1978, while at Dapto, Steve Morris was the last player to represent Australia while playing for a NSW Country team. Morris joined St George the following year and after starting in reserve grade was promoted to firsts for round 5 and was arguably the most influential halfback in the competition for the rest of the season. When the Australian Rugby League retrospectively named the best player for each Grand Final from 1954 to 1985, Morris was named man of the match for 1979. He switched to the wing in 1983 and was an instant success, scoring 16 tries in 18 games. He was Dally M winger of the year in 1984 and 1987 (when playing for Easts), scored Saints only try in the 1985 Grand Final, and was Saints leading tryscorer in 1980, 1982, 1983 and 1984. Sons Brett and Josh both played for St George and in Grand Finals: Brett for Saints in 2010 and Sydney Roosters in 2019; Josh for Canterbury in 2012 and 2014.

Jason Nightingale made his NRL debut as a 20-year-old winger in round 8, 2007, scoring a try in a 28–16 win over Penrith at Kogarah. He appeared in at least 18 games a season every year from 2008 until his retirement at the end of 2018. Born in Sydney to New Zealand parents and a Renown United junior, Nightingale made his international debut for the Kiwis in the Centenary Test at the SCG in 2008. He ended his career with the third most first-grade appearances for the Dragons, behind Ben Hornby and Ben Creagh, and was the fourth St George Illawarra player to score 100 NRL tries, after Nathan Blacklock, Matt Cooper and Brett Morris. He retired as one of five men — next to Graeme Langlands, Reg Gasnier, Johnny Raper and Ken Kearney — to appear in more than 30 Tests as a Dragons player, and one of two, along with Langlands, to play in three World Cups while a member of the club. He scored two tries in the 2010 Grand Final and was the club’s player of the year in 2011.

Noel Pidding played for City Firsts and NSW in his first season with St George, in 1947, and for Australia in his second, when he was 21 years old. Originally a fullback, but was on the wing for the 1949 finals, scoring a double in the grand final as the Saints claimed their second premiership. Such was his pointscoring feats, he became known as the ‘Bradman of Rugby League’ in the ’50s, and was named St George captain in 1953, leading the Dragons to the premiership final.

A famous figure in league history as the man who scored the try that won the 1950 Ashes series, Ron Roberts came to St George from the Waratah-Mayfield club in Newcastle in 1949 and scored 25 tries in premiership matches, a St George record, including two in each of the semi-final and grand final defeats of Souths. Injuries slowed him at the start of 1950 and 1951, but he finished both seasons in grand style, especially in 1950, when he scored nine tries in his last four games. In three years at Saints, Roberts averaged exactly a try a game.

After playing President’s Cup in 1950, Tommy Ryan appeared in 25 games with the firsts in 1951–52, and then toured with the Kangaroos, where he scored two tries on his Test debut. A mainstay of the St George team that reached the premiership final in 1953, Ryan played at Temora in 1954 and Rockhampton in 1955. He returned to Kogarah at the end of 1955 and in the next two years was magnificent, scoring 19 tries in 19 games in 1956 and then 26 tries in 19 games in 1957, which remained the Dragons record for most tries in a season until Nathan Blacklock scored 27 in 28 games in 2001.

Frank ‘Fatty’ Saunders scored 18 tries in 1927, when St George made the premiership final, a club record that stood until 1940. Saunders made his first-grade debut as a centre in 1923 and was on the wing for NSW a year later and in 1925. He remained an important part of the St George line-up until 1929 and retired as the first St George player to score 50 first-grade tries. He later served the club as a selector, vice-president and committeeman.

A popular and underrated goalscoring winger who came to the club after three mediocre seasons with Easts and Norths, Ricky Walford played just two matches in his first season at Kogarah, and went to wear the Red V in more than 200 first-grade games. He was the first winger to play 200 games for the club, was the competition’s leading point scorer in 1989, when he played for Country Origin, and played Origin football for NSW in 1990. Walford scored Saints’ first try in 1992 Grand Final and also appeared in the 1993 decider.