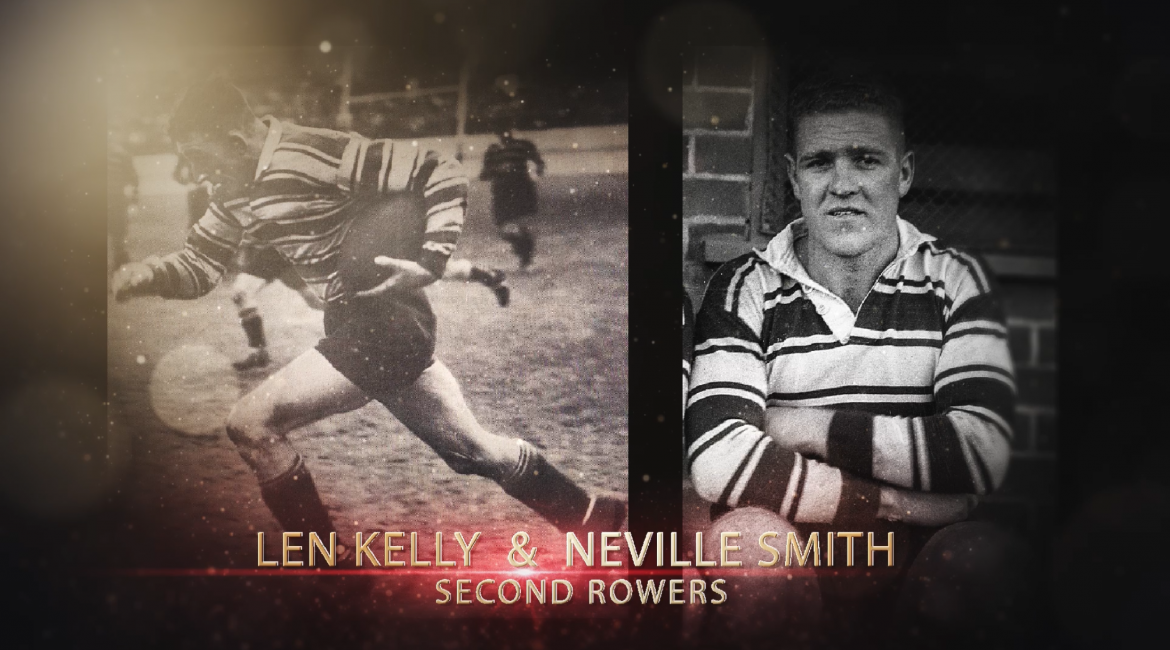 David Barnhill played for Canberra in two grand finals before joining St George, where he appeared in three grand finals in five years. Playing mostly as a second rower, and occasionally as a prop, he was a constant presence in the St George pack from 1992 to 1996. He played 111 of a possible 121 games and was in the starting XIII for all but four of those 111 matches. While at the Dragons, he played for NSW in 1994 and 1995, and for Country against City from 1993 to 1996. He represented Ireland at the 2000 World Cup

Eugowra forward who made Australia’s tour of New Zealand in 1965 before joining St George a year later, Barry Beath played 17 first-grade games in his first season but broke his collarbone in the last game before the semi-finals and missed the rest of the season. Beath played in three Grand Finals with Saints, in 1971 (when he scored the Dragons’ first try), 1975 and as a replacement in the replay in 1977. He toured New Zealand again in 1971, but as with his first trip did not play a Test. Mostly a powerful second rower, Beath moved to the front row late in his career. He retired with 198 first-grade games, at the time the second most by a St George forward, behind only Norm Provan.

Ben Creagh played wing, lock and second row for the Dragons, was club captain from 2013 to 2015, and was a member of the Dragons side that won the 2010 Grand Final and 2011 World Club Championship. His 270 games ranks second in Dragons history for most appearances, three matches behind Ben Hornby. Creagh debuted as an 18-year-old winger in round 22, 2003, and was a permanent fixture in the Dragons side from early in the following season until a knee injury forced his retirement after three rounds in 2016. A four-time St George Illawarra player of the year (2007, 2009, 2010 and 2014), he didn’t miss a game in 2010 when the Dragons won their 16th premiership.

Tyson Frizell represented Wales in the 2011 Four Nations and 2013 World Cup (his father was born in Swansea), but switched allegiance to Australia in 2016 and was in the XVII for all the Kangaroos’ main games during the 2017 World Cup, and for Australia’s four Tests in 2018–19. Frizell appeared in more than 20 Dragons matches every year from 2013 to 2019, except for 2014, when he was out for two months because of an ankle injury. Frizell was St George Illawarra’s Player of the Year in 2016. In 2018, an nrl.com players’ poll judged him ‘the best edge forward’ in the game.

Scott Gourley is a son of former Saints prop Robin Gourley, who played for the club in 37 games, including two Grand Finals, from 1963 to 1966. In 1992, the Gourleys became the first father and son to both appear in a Grand Final for the Dragons (since matched by Steve and Brett Morris and Craig and Dean Young). Scott Gourley played five rugby union Tests for the Wallabies in 1988–89 and was chosen for the Kangaroos’ tour of Papua New Guinea at the end of 1991, when he made his only league Test appearance in the First Test. He started in the second row in the 1992, 1993 and 1996 Grand Finals. In 1992, he played a key role in Saints first try and scored the second. Gourley played for Country Origin three years straight from 1991 and made his sole State of Origin appearance in 1993.

Len Kelly joined the St George third-grade squad after playing President’s Cup in 1931, broke into the firsts in 1933, and went on to become the first man to play 200 grade games for the club. Kelly was not a flashy forward but he was tireless and hardly missed a first-grade game for Saints between 1934 and 1944. He was in the first St George team to win a premiership in 1941 and led the team to the grand final (losing 11–9 to Canterbury) in the following year. He served as club president from 1962 to 1977.

A member of the inaugural St George first-grade team that lost to Glebe on 23 April 1921, ‘Curly’ Lapham quickly made a name for himself for his speed, to the point that, after starting as a back-row forward, in his second first-grade season he was moved briefly to the wing. He toured New Zealand with NSW in 1922 and was a regular in the NSW team for three years in the mid ’20s, when he played with Souths. Lapham returned for a final season with the red and whites in 1929.

Monty Porter came into the Dragons pack for the 1958 Grand Final, when Kevin Brown was injured. He played for NSW in 1960 and in six Grand Finals for St George, the first three as a second rower (1958–60) and the remainder as a prop (1962–64). In 2008, an expert panel retrospectively named Porter as man of the match in the 1960 Grand Final. He was Cronulla’s first captain when the Sharks joined the premiership in 1967.

Norm Provan played in the lower grades in 1950, his first year at Saints, but was in the firsts for the start of 1951 and would remain there for 15 seasons. Saints never missed the finals in his 15 years of first grade and won the grand final in each of his last 10. He was captain-coach from 1962 to 1965, and the last image of him as a player is of a colossus striding through the mass of fans that had invaded the SCG after the 12–8 win over Souths in the grand final. Provan was a star of Australia’s triumphs in the 1954 Ashes series and the 1957 World Cup, but it was his efforts for St George that forged the legend. He was man of the match in the 1957, 1958 and 1963 grand finals. In March 1963, he was the first active player to be made a life member of the club. In that year’s grand final, his muddy embrace with Wests captain Arthur Summons was captured in John O’Gready’s iconic ‘Gladiators’ photo. His 256 first-grade games was a Dragons record until Ben Hornby went passed him in 2012.

Originally from Mackay, Elton Rasmussen came to St George in 1962 after making the Kangaroo tour in 1959–60, when he played in the third Ashes Test. He played in the last five Grand Finals in the 11-year winning streak, two Tests against Great Britain in 1962, made the 1967–68 Kangaroo tour (when he appeared in all six Tests) and was in Australia’s winning World Cup squad in 1968. He returned to Queensland, to captain-coach Souths in Brisbane and again wear the maroon jersey, 10 years after his interstate debut.

Arguably the most influential forward in the competition from 1977 to 1979, ‘Rocket’ Reddy was a key figure in two Saints premierships and part of Australian teams that retained the Ashes in 1978 and 1979. Originally from Rockhampton, he was only 17 when he played his first game for St George — a reserve-grade trial against Wests in February 1972 — and was immediately compared to Norm Provan. Reddy made his first-grade premiership debut three months later and was in the NSW side before his 20th birthday. Injuries kept him out of the finals series in 1975, but two years later he was chief catalyst for the young Saints’ team’s stunning surge to the premiership. He was equally superb in the ’79 Grand Final, when he was a dominant figure in the first half (St George led 17–2 at half-time) and scored Saints third try.

Beau Scott made his NRL debut for Cronulla in 2004 and joined Saints for the 2007 season. He played his first Test on the 2011 Four Nations tour, and would play two more in 2014, when he was with Newcastle and was named the Dally M second rower of the year. Scott played twice for Country Origin and five Origin matches for NSW while a member of the Dragons. He started in the second row for the Red V in the 2010 Grand final team and the 2011 World Club Challenge.

Neville Smith holds a special place in the St George story, as the captain-coach of the first Saints team to win a first-grade premiership. Smith arrived in 1939 at age 23, was quickly named captain-coach, and lifted the team from last to equal second on the ladder and was the competition’s leading pointscorer. He played for NSW in 1940 and 1941, when he would have been a Test certainty, and was an inspiration in Saints’ first premiership year before stunning the league world by retiring. Smith made a comeback in 1943, but a series of leg injuries prompted him to quit once again at season’s end, this time for good.

Robert Stone made his first-grade debut as a 19-year-old in 1975. Two years later, under Harry Bath’s coaching, he was one of the best second-rowers in the competition. In the Grand Final replay, after Rod Reddy was injured, Stone moved to lock and scored a famous try, running 25 metres from the scrumbase to give St George a match-winning lead. He came on as a replacement in the major semi-final (when he scored the winning try) and the Grand Final in 1979, played in the inaugural State of Origin match, was a major figure in the club’s late run to the finals in 1983, and then captained the team to the top-three in 1984. Stone played 281 games in all grades for the club.

A Hall of Fame forward who played his best football after leaving St George in controversial circumstances, Gorden Tallis missed the 1996 season over a contract dispute and then joined Brisbane. He went on to star in club, Origin and Test football, win a Clive Churchill Medal in 1998 and captain Australia. In four seasons at St George, started around 40 per cent of his matches in the bench, he only becoming a regular starter in May of his final season at the club. He debuted in Origin football in 1994, while playing for the Dragons.

A Hurstville United junior who debuted for Saints as a 17-year-old in 1995 and played in the Grand Final against Manly a year later, Lance Thompson remains the youngest footballer to wear the Red V in a first-grade game. He appeared in his second grand final in 1999 and captained City Origin in 2001, the first of five appearances for City from 2001 to 2007. Thompson played 69 games for St George and 132 for St George Illawarra, making him one of 14 men to appear in 200 or more games for St George/St George Illawarra. He didn’t miss a game in his final season with the club, in 2005.

Graeme Wynn came to St George from Newcastle Wests in 1979 and had an outstanding debut season, culminating in Saints’ dominant Grand Final win over Canterbury. Wynn toured New Zealand with the Australian side in 1980. Later that year he was in the NSW pack for the first ever State of Origin match. He was the club’s leading pointscorer in 1980 (six tries, 68 goals) and 1982 (five tries, 38 goals). Wynn was with St George throughout the 1980s, appearing in every finals match the Dragons played in the decade, including the 1985 Grand Final. He was also part of the club’s victory in the 1988 Panasonic Cup final.