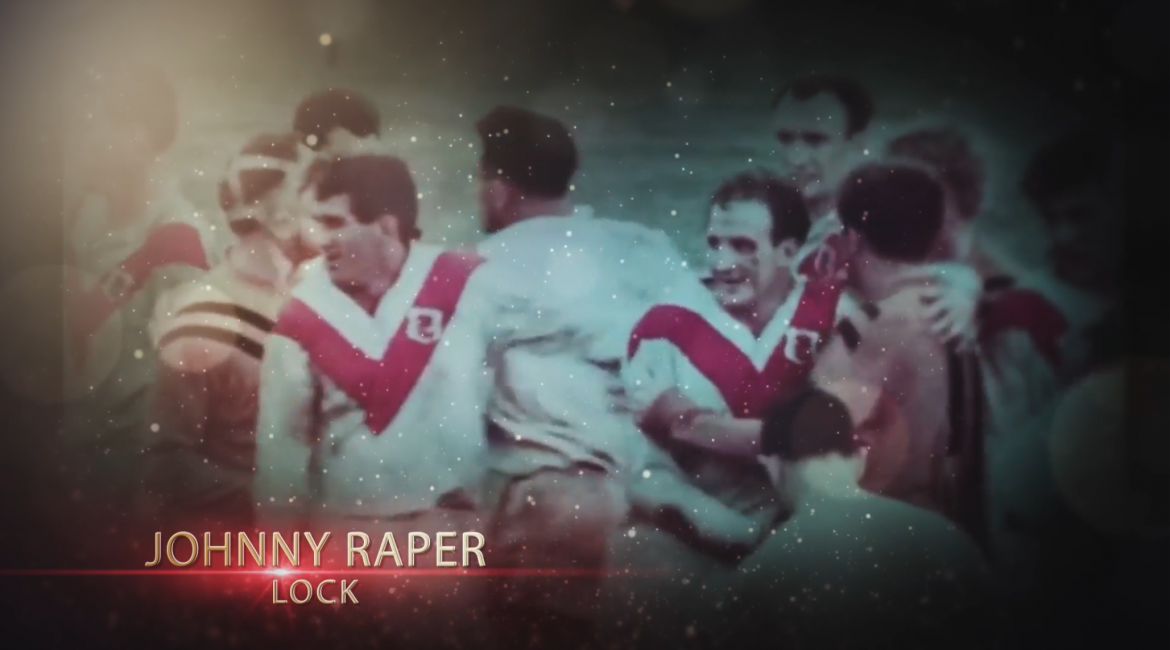 Wayne Bartrim was a goalkicking lock forward who was picked as a makeshift hooker for Queensland in the 1995 Origin series and did so well he earned Test selection and played for Australia at the 1995 World Cup. A year later, Bartrim missed only one game as Saints reached the Grand Final and won what proved to be his final Test cap against Papua New Guinea. He scored more than 100 points in each of seven straight premiership seasons, 1995 to 2001, and was the club’s leading pointscorer every year from 1995 to 1999. Bartrim was one of five players — with Anthony Mundine, Lance Thompson, Colin Ward and Nathan Brown — to appear in both the 1996 and 1999 Grand Finals.

A tough and sometimes controversial figure because of his aggressive play, for two years, 1926 and 1927, Aub ‘Jockey’ Kelly was the best lock forward in NSW, but there was no Test football in either of these seasons. The renowned official Harry Sunderland described him as ‘ubiquitous’ and ‘a great worker’. Kelly’s play was compared to some of the game’s greatest ever players, even Dally Messenger. In 1928, an untimely suspension cost him a Test jumper. In 1929, coach Frank Burge made him Saints captain.

In 1990, Brad Mackay matched the feat of Bob Bugden by scoring three tries on his Test debut, against France at Parkes. In 1993, a year after he played as a replacement in the 1992 Grand Final, Mackay became the second player, after Canberra’s Bradley Clyde two years earlier, to win the Clive Churchill medal in a losing Grand Final side. He played a total of 196 first-grade games for St George (1987–94), Illawarra (1996–98) and St George Illawarra (1999). Mackay’s 12 Test appearances were the most by a St George player in the 1990s. After making his interstate debut as a 20-year-old in 1989, he played 14 Origin matches from 1990 to 1994, more for NSW in the decade than any other Saints player (Mark Coyne played 19 for Queensland from 1990 to 1997). Mackay left the Dragons to become the inaugural captain of the Western Reds in 1995, when he played his last two Origin games. He came off the interchange bench in the 1999 Grand Final loss to Melbourne.

Known as ‘The Count’, Noel Mulligan was rated by journalist Tom Goodman as ‘Australia’s best all-round forward’ in the years immediately after the Second World War. An Illawarra product, Mulligan played with Newtown and at Bowral before signing with St George in 1950, but injuries hampered him throughout his first season at Kogarah. He recaptured his best form and his Test place in 1951, when Saints reached the premiership final.

In three short years, Walter Mussing became one of the most popular players in St George history. He had been a lock in Queensland and on the far north coast of NSW, but was excellent as a winger with Saints in 1945. Mussing was a sensation when he moved to the back of the scrum in 1946, until he fractured his collarbone in a round 13 win over Wests and missed the rest of the season. It is no exaggeration to say his absence cost the club the premiership. One paper called him ‘the greatest lock in Australia and the most popular player playing football today’. However, injuries took a toll and to the dismay of Saints fans he returned north at the end of the ’47 season.

Frank Hyde called Johnny Raper ‘the finest footballer I have seen’. Said Jack Gibson: ‘There was an intensity about him. Nobody trained like he did.’ Ken Kearney reckoned he was ‘the perfect cover defender’. After two seasons with Newtown, Raper signed for St George in 1959 and would stay with the club for 11 seasons. In that time, he won eight premierships with the Dragons, was captain-coach in 1969, played 39 Tests for Australia, went on three Kangaroo tours and was the victorious Australian captain at the 1968 World Cup. He is one of the original Immortals. Raper played in the 1959 Grand Final as a centre, after Johnny Riley and Reg Gasnier withdrew, and in the 1962 Grand Final at five-eighth, after Brian Clay broke his arm. He was the NSWRL’s official player of the year for 1960 and 1964, and the Sun-Herald’s player of the year in 1960, 1963 and 1967.