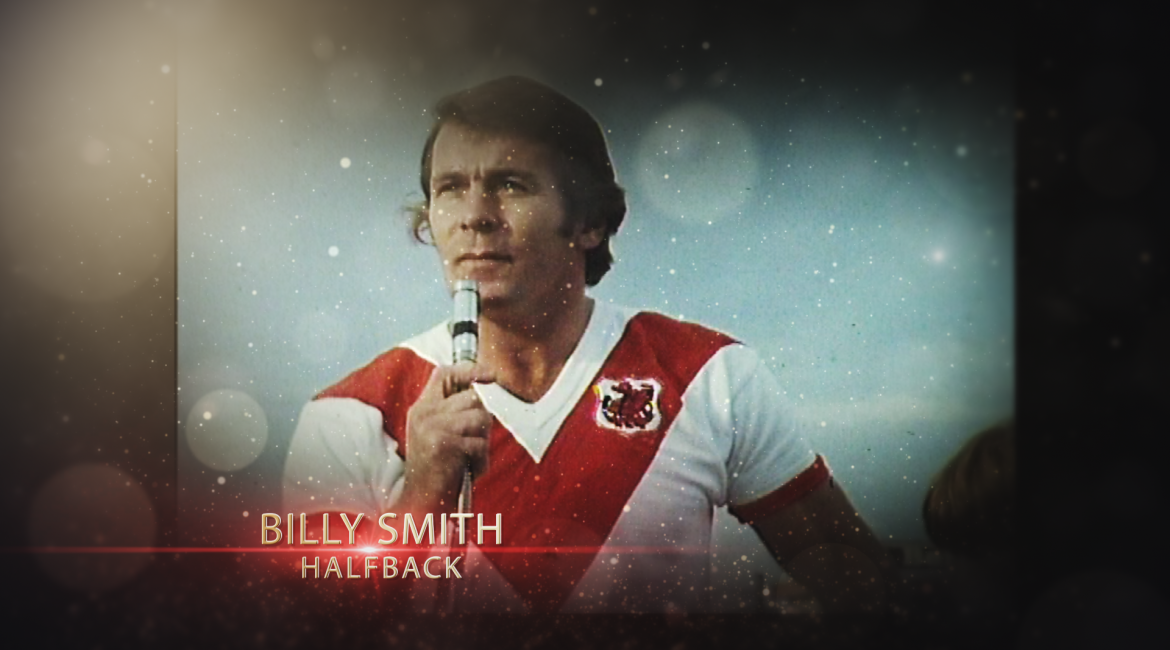 Bob Bugden made his first-grade debut as an 18-year-old halfback in the 1954 finals series. Two months earlier, he was playing B-Grade for Sutherland in the St George juniors and was a member of Saints’ President’s Cup team. Bugden was halfback in the first six Grand Finals (1956–61) of Saints’ 11-year winning streak, scoring a try in three of those wins. He represented NSW in 1959 and 1960 while at St George (and in 1964 when he was playing for Parramatta). A Kangaroo in 1959–60, he played two Tests against France in 1960, scoring three tries on his Test debut.

A former rugby union representative scrum half (playing for NSW in 1960 and as a reserve for the Wallabies behind Ken Catchpole in 1960 and 1961), George Evans was signed by St George in the 1961–62 off-season as a successor to Bob Bugden. He played halfback in four Grand Finals, 1962 to 1965, but never truly established himself as Saints halfback, sharing the role with Billy Smith until Smith (who often appeared in the centres) became entrenched in 1966. Evans’ best season was 1963, when he played 19 first-grade matches and scored Saints’ first try in the Grand Final. He later coached Corrimal in the Illawarra competition.

Noel Goldthorpe played halfback for Western Suburbs before joining St George in 1992 and playing Grand Finals in each of his first two seasons at Kogarah. He signed with Super League in 1995 but remained at Saints for 1996 and appeared in another Grand Final, becoming the fourth Dragons halfback — after Bob Bugden, George Evans and Billy Smith — to play in three Grand Finals. Extremely durable, Goldthorpe played in 106 games for Saints in five years, missing just five games in the Grand Final years: 1992, 1993 and 1996. After leaving St George, he enjoyed one of his biggest moments in football when he kicked the winning field goal for NSW in the Super League Tri-Series final in 1997.

Ben Hornby was a permanent fixture in the Dragons’ first-grade line-up from 2002, as a fullback, five-eighth and halfback. Hornby became the Red V’s full-time No. 7 in 2008 and two years later became just the second back in club history, after Johnny Hawke in 1949, to captain the Dragons to a premiership. He spent his entire NRL career with St George Illawarra, was the club’s player of the year in 2003, and surpassed Norm Provan’s record for most first-grade games by a Dragons player in early 2012. He played his one Test in 2006 as a halfback, the first Dragon to play halfback for Australia since Billy Smith in 1970. Hornby first captained St George Illawarra in 2003 and was appointed full-time skipper when Mark Gasnier moved to France and Wayne Bennett came to the club as coach in 2009.

Mick Kadwell was a Kangaroo in 1929–30 who moved to St George in 1931 and led the club to the finals in three of his four seasons as a Saint, including the 1933 premiership final. At his peak, Kadwell was a genuine tryscorer, but he was more renowned for his craftiness with the Dragons. He broke his leg playing for NSW in 1932 and his loss was a disaster for St George; the club won only two of its last nine games to miss the finals. Kadwell was captain-coach in first two seasons with Saints, and captain in every game he played for the club.

One of the most popular players in St George history, Alby McAndrew made his first-grade debut as a 17-year-old in 1938, when Saints finished last, but became a star after Neville Smith became coach in 1939. No taller than 5ft 4in (162.5cm), McAndrew played for City Seconds (in 1939) and NSW (in 1940), and formed a terrific partnership with five-eighth Roy Hasson as Saints charged to their inaugural first-grade premiership in 1941. A combination of injuries, illness and war service meant that 1941 was the highpoint of his football career.

Billy Smith partnered Reg Gasnier in the centres in three Grand Final victories (1963–65), before establishing himself as Australia’s best halfback of the late ’60s. Smith first played halfback regularly for Saints in 1964, doing so well he was quickly picked in that position for NSW and Australia. He was the Kangaroo half in all his 26 Tests between 1964 and 1970, was Australian vice-captain at the 1970 World Cup (captaining his country in one Test), and won the Harry Sunderland Medal as the best Australian player in the 1966 Ashes series and the following year’s Tests against New Zealand. For St George, he played a record 296 grade games, 234 of them in first grade. His combination with Graeme Langlands in 1971, to get Saints to the Grand Final, was one of the finest two-man performances in Dragons history.