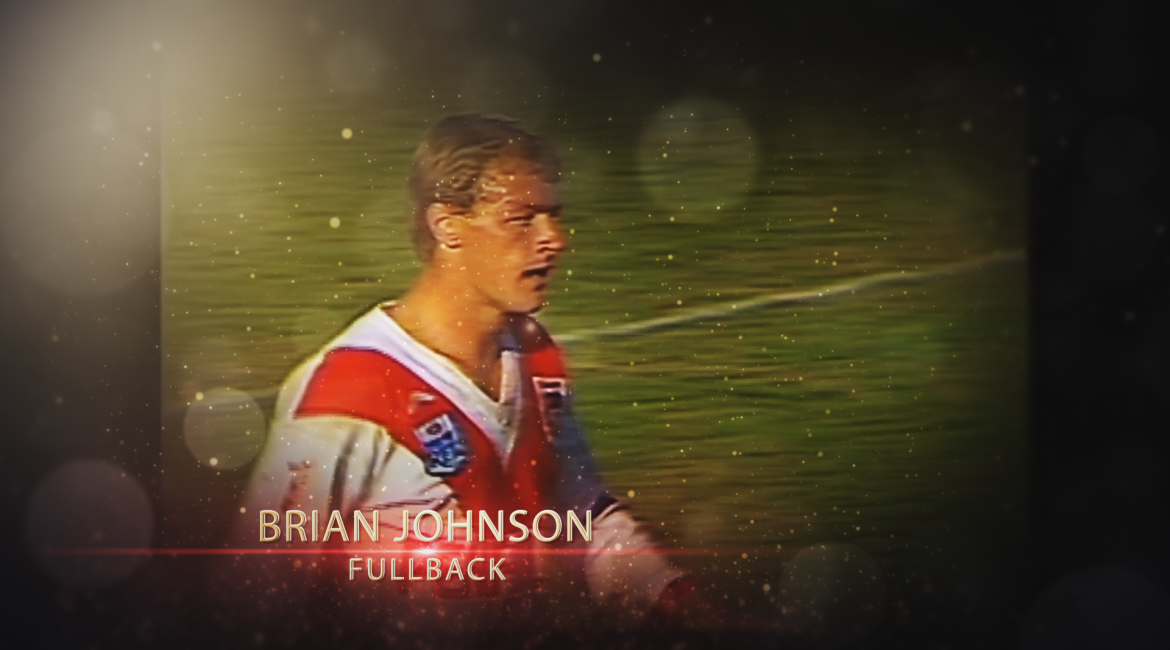 The best three years in the recent history of the Dragons occurred when Darius Boyd was at the club. St George Illawarra were minor premiers in 2009, won the Grand Final in 2010, were world club champions in 2011, and unlucky to lose in the second week of the finals in 2011. In 2010, Boyd was the Clive Churchill Medallist as the best player in the Grand Final, the Dally M fullback of the year, the Rugby League International Federation’s fullback of the year and the Rugby League Players’ Association’s player of the year. During his three years with the Dragons, he played in seven Tests (for seven wins) and nine Origin matches (for seven wins).

Originally from South Grafton, Brian Graham came to St George in 1955, making one first-grade appearance in his first season, and scored 100 points in the reserves in 1956. Replaced Doug Fleming in first grade in 1957 and remained Saints’ fullback until his work took him to Korea in 1962. Graham’s nine tries in 1959 set a new club record for most tries by a fullback in a season. He returned in 1964 to break Fleming’s first-grade point scoring record for the club. He became the first man to score 600 first-grade points for the club.

One of the most popular players to wear the red V. Ted Goodwin came to St George in 1972 after playing for Country Firsts from Dapto in the previous year. He played for NSW and Australia in 1972 and despite suffering a broken ankle in 1973 still made that year’s Kangaroo tour, appearing in three Tests. Primarily a fullback, he was obliged to play mostly centre while Graeme Langlands was wearing Saints’ No. 1 jumper. Goodwin suffered a fractured cheekbone in the 1975 Grand Final, three weeks after scoring a brilliant try to beat Manly in the major preliminary semi-final. When he finally got the chance to play full-time in his favourite position, in 1977, he was a key figure in the Dragons’ premiership triumph, scoring famous tries in the major semi-final and the first Grand Final, and kicking six goals and a field goal in the replay.

Brian Johnson was a Dapto junior and Country Firsts fullback in 1978 who came to St George in 1979 and immediately played a leading role in the club’s 15th premiership victory. He was a permanent fixture at fullback for Saints from 1979 to 1984, before injuries and the good form of his replacement, Glenn Burgess, cost him his place in 1985. He didn’t miss a game from his debut for Saints in round one of 1979 until round 22 in 1982, and was Dally M fullback of the year in 1980.

Graeme Langlands moved to St George in 1963, and was Saints’ fullback in that year’s Grand Final, before starring as a centre (with Ken Thornett at fullback) on the 1963–64 Kangaroo tour. Langlands was most critics’ choice as man of the match in the 1964 Grand Final, when he set up the game’s only try and kicked four pressure goals. He was Saints captain from 1970 to 1976 (including in the 1971 and 1975 Grand Finals), captain-coach from 1972, first-choice Australian captain from 1970 to 1975, captain-coach of the 1973 Kangaroos and the Australian team that retained the Ashes in 1974, and coach of the Australian team that won the World Series in 1975. Langlands was Saints’ leading pointscorer nine times and the second man, after Norm Provan, to play 200 first-grade games for the club. In 1999, he and Wally Lewis became the game’s fifth and sixth ‘Immortals’.

In a brief career in Sydney football, Frank Meighan established himself as the first in a long line of exceptional St George fullbacks. A star of the 1927 season, Meighan missed the premiership final because of a controversial suspension. He was even better in 1928 when some rated him the best fullback in the country, but broke his ankle prior to the start of 1929 season, and injury that ended his Saints career.

Jack Wedgwood was a Dorrigo import who took advantage of an injury to Stan Robinson in 1937 and remained the club’s top fullback until he signed up for military service in 1941. Wedgwood played for NSW in 1940, was an important member of the club’s first premiership winning side a year later and would surely have played for Australia but for the war. He returned to Dorrigo, from where he captained Country Firsts and represented NSW in 1946.