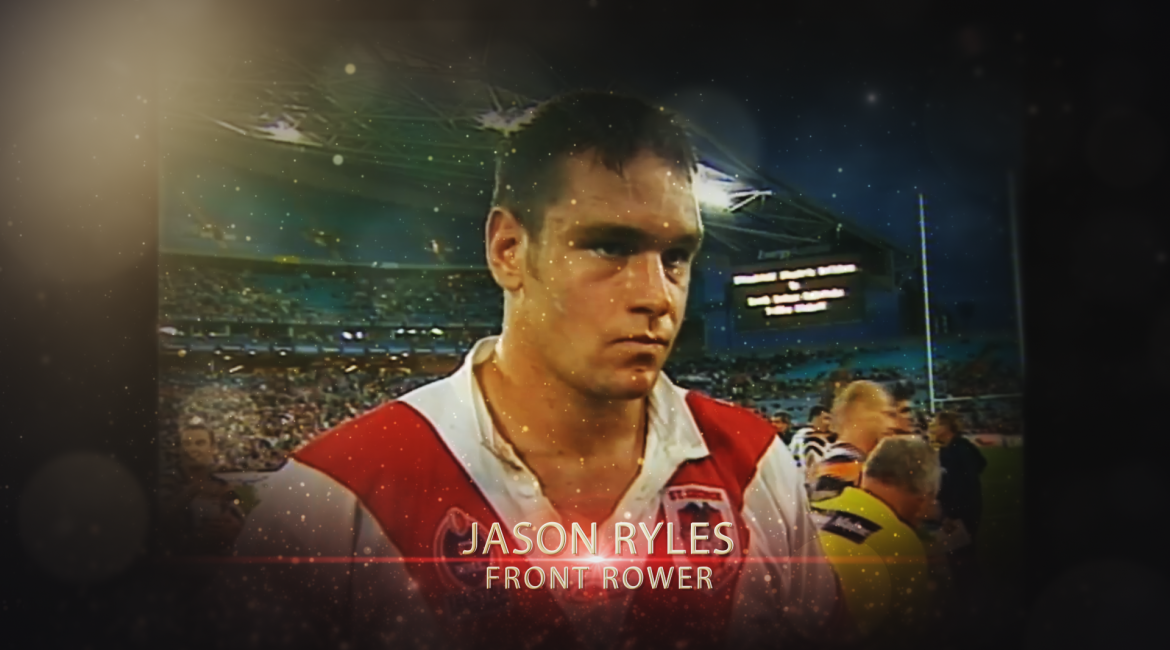 A Shellharbour junior who in 2012 became the third man, after Roy Ferguson and Steve Edge, to play 100 games for two premiership clubs, one of those clubs being the Dragons, Luke Bailey impressed in his debut season with St George Illawarra in 2000, when as a 20-year-old he appeared in all but three of the Dragons’ matches. He first played for NSW in 2002. Eleven of his 15 Origin matches came while he was a Dragons player, as did the first two of his four Test appearances. Bailey was St George Illawarra’s player of the year and Dally M front-rower of the year in 2005. He joined the Gold Coast Titans for the 2007 season.

Universally regarded as one of the best Australian footballers never to wear the green and gold, Harry Bath was a ball-playing second-rower and prop who spent a decade with Warrington in England before joining St George in 1957. He won a Grand Final in each of his three years as a player at Saints, in 1957, 1958 and 1959, and broke Saints’ pointscoring record in 1958 with 225 points (108 goals and three tries). Bath was one of the game’s greatest coaches — he started with St George reserves in 1960, and later coached Balmain to Grand Finals and at Newtown, coached Australia in three World Cups (1968, 1970 and 1972) and then famously returned to Saints to win premierships in 1977 and 1979.

In 1956, Keith Holman rated Kevin Brown and Norm Provan man of the match in the grand final. A year later, journalist Jim Mathers wrote that Brown performed like ‘a supercharged earth-moving machine’ against Manly in the premiership decider. Brown scored the first try in the 1956 Grand Final. He played for NSW against Queensland in 1957 and 1958, but missed the ’58 Grand Final because of a knee injury and had a cartilage removed in the following off-season. He came back to play 37 more games in the next three years, including the 1961 Grand Final.

Bill Hardman came to the club in 1923 and made his representative debut a year later, for Metropolis against Newcastle. Hardman made the NSW side in 1925–26 and played in the premiership final in 1927. Three years later, he was in almost career-best form as Saints reached the grand final, but illness prevented him from playing in the premiership decider. He played his 100th grade game in 1931 and then retired.

A star of the St George pack from the moment he made his first-grade debut in 1947, Jack Holland played at 15st 2lb (96kg), was known as ‘Dutchy’, and was agile, outrageously strong and deceptively quick. He made his NSW and Test debut in 1948, made the 1948–49 Kangaroo tour and was Australian vice-captain for all three Tests in 1950, when Australia won an Ashes series for the first time since 1920. Holland was superb for St George that year, most notably when he scored four tries in the opening round against Wests. He missed only one game in 1951, but knee trouble slowed him early in the following year and he found himself in the reserves.

One of four graduates from the Arncliffe Scots junior club to play for Australia, alongside Johnny King, Matt McCoy and Ross Kite, Pat Jarvis played for Australia in 1983 a year before he made his NSW debut. He was in the front row for all three games in 1985, when NSW won an Origin series for the first time. Jarvis played for St George in an era when the club was blessed with many outstanding forwards, but rarely missed a game from 1982 to 1986, either as a second rower or, more often and especially late in his time at Kogarah, as a prop. He appeared in all Saints finals matches from 1983 to 1985, including the 1985 Grand Final loss to Canterbury

Jack Munn was 21 years old and on leave from the AIF when he scored two tries for St George in the ‘State Cup’ final of 1944, his first appearance in any competition in Saints’ top side. Because of the War, he did not make his premiership debut until the opening round in 1946. Munn was about 17 stone (108kg) and stood 6ft 1½in (182cm). After four first-grade games in ’46, he was in the NSW team to play Great Britain, but a sprained wrist, concussion and bouts of malaria slowed him until the finals, when he was outstanding, especially on grand final day when some rated him man of the match. He hardly played in 1947, and continued to battle illness and injury until the 1949 finals, when he was magnificent as the Dragons claimed their second premiership. Munn moved to Queensland in 1950 but returned to Kogarah to play one more first-grade game during the following season.

Bryan Orrock was already a grand final winner with Souths when he joined St George in 1954. For the next five seasons, he was a massive contributor when he was on the field, but he was desperately unlucky with injuries, which restricted him to 54 games. Orrock played for NSW in 1955 and then appeared in 18 of 20 games in 1956, when he represented City and NSW, was part of St George’s grand final-winning team and made the Kangaroo tour. A knee injury and then a broken nose restricted him to just five games in England and France, but two of them were Tests, and then he broke his forearm in the trials at the start of 1957, which led to St George signing Harry Bath. He came back late in the year, and played in the grand final.

Kevin Ryan’s football career began in Ipswich, Queensland, from where he went on to play five rugby union Tests before switching codes in 1960. He was also a Queensland amateur boxing champion. Ryan was part of seven winning Grand Final teams with St George, before switching to Canterbury, where as captain-coach he brought an end to Saints’ 11-year premiership reign in the 1967 preliminary final. Injuries prevented him from playing more than two league Tests. During his one Kangaroo tour (1963–64), Ryan appeared in only four games after suffering a serious leg injury. He was picked for the first Test in 1966 but missed the entire series with a badly corked knee. Nicknamed ‘Kandos’, after the cement producing town in western NSW, Ryan was universally regarded as the man of the match in the 1965 Grand Final and scored St George’s third try in the 1966 premiership decider.

Jason Ryles was 21 years old when he made his maiden first-grade appearance, against Parramatta in round 15, 2000. He played for Country Origin and Australia during the following season, and made his State of Origin debut in 2002. NSW won five and drew one of Ryles’ eight Origin matches. His 15 Tests is most by a Dragons prop except for Craig Young, who played 20 Tests from 1978 to 1984. Ryles was twice St George Illawarra’s player of the year, in 2006 (with Mark Gasnier) and 2008.

Bruce Starkey was an Arncliffe Scots junior who played for St George in the 1973 reserve-grade Grand Final and then in 19 first-grade games in 1974, his first season of the top grade. Initially a rugged second-rower, Starkey found himself on the fringe of the first-grade side in 1975, but did appear in that year’s Grand Final, as a second half replacement for Robert Stone. He was a stalwart of the first-grade side from 1976 to 1979, moving to the front row in 1977 and playing in the Grand Final wins of ’77 and ’79. Starkey didn’t miss a game in 1976 or 1979.

Clarrie Tye scored the winning try in St George’s first game at Hurstville, in 1921, and was Saints’ best forward throughout their debut season. Tye became club captain in 1922, a year in which he toured New Zealand with the NSW side. He announced his retirement at the end of the 1926 season, but was talked him into one more year, which meant the 34-year-old warhorse was able to play in St George’s first premiership final.

A key figure in the St George Illawarra team that won the premiership in 2010, Michael Weyman was originally from Moruya. He came to the club in 2009 after six seasons at Canberra, where he had been unable to build on the enormous potential he showed as a young front-rower. Weyman became a powerhouse under Wayne Bennett’s coaching, playing for NSW in his first season as a Dragon, and for Australia in his second. ‘I knew that we couldn’t win the premiership without him,’ Bennett said in 2012. ‘He was that important, because he gave confidence to everyone in the team.’ A Michael Weyman statue is located outside Moruya’s War Memorial Swimming Pool.

Ken Kearney called him ‘the toughest footballer I have ever known’. Billy Wilson was mostly a lock forward in in his early years, and played in the bush in 1950 and 1951, and in 1957, after winning a premiership with St George in 1956, when he effectively switched to the centres after Merv Lees was injured. Wilson returned to Kogarah in 1958, and became one of the leading props in the competition. He won the club award for best player in that season’s grand final, and played in all three Tests in England and two in France on the ’59–60 Kangaroo tour. Wilson played in six of the 11 straight premierships (1956, ’58–62), captaining the side in 1961 and being sent off straight after half-time a year later.

From his Test debut in 1966 to the 1970 Ashes series, John Wittenberg never missed a Test for which he was available. He was with Theodore in Central Queensland when picked for the second Ashes Test in 1966, and sought a transfer to St George in 1967 but was blocked by the QRL and sat out the year, missing the 1967–68 Kangaroo tour. Wittenberg made his first-grade debut for Saints four days after his 30th birthday. He played 18 games for his club and in all of Australia’s matches at that year’s World Cup. In 1969, he broke his cheekbone on Australia’s tour of New Zealand, but when was rushed straight back into St George’s first-grade team and immediately, to quote journalist Tom Goodman, ‘tackled with a certain degree of ferocity’. In 1970, he played in the first two Ashes Tests but missed the series decider because of a knee injury. He appeared in finals matches for St George in all three of his seasons at the club.

For the years book-ended by the 1978 and 1982 Kangaroo tours, Craig Young was the best prop in rugby league. He was France Facer’s last signing, and won a premiership in his first season. Young became St George captain in 1979, a role he kept for most of the next decade, being skipper in a club-record 173 games. In his first season at the helm, he led Saints to a dominant premiership victory. Young earned 20 Test caps and led Saints to the 1985 Grand Final and victory in the 1988 Panasonic Cup. Following his retirement at the end of the 1988 season, he was immediately appointed St George’s first-grade coach.