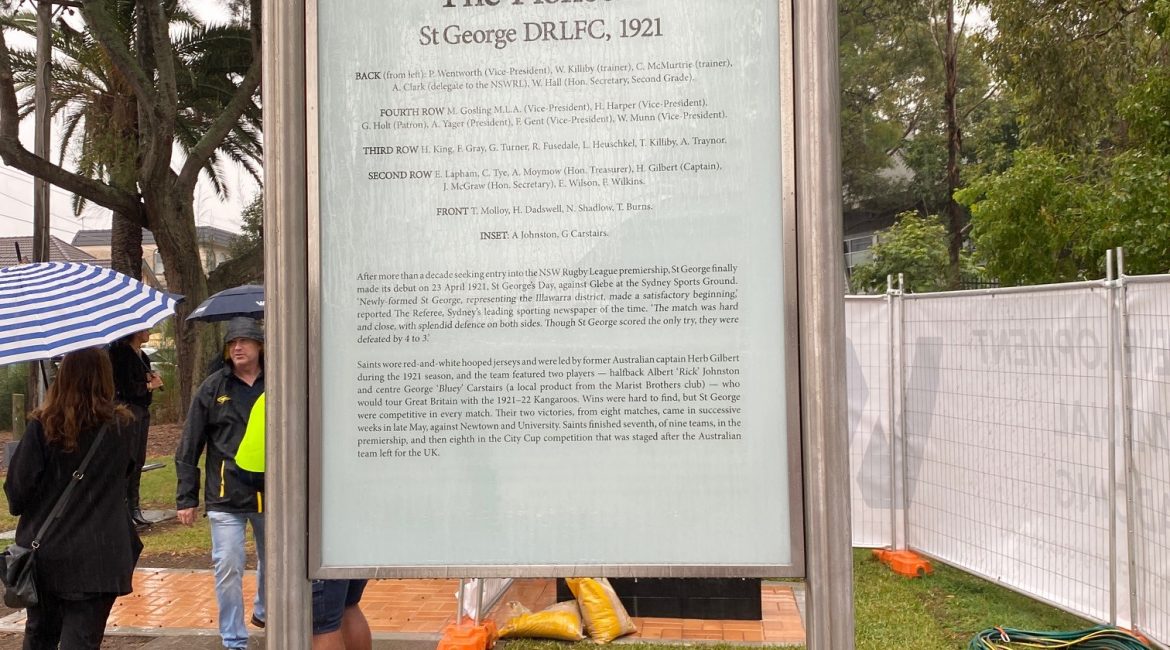 Modern day legends Ben Creagh, Ben Hornby and Jason Nightingale have been chosen and added to the illustrious list of 18 legends already inducted and along with the Club’s inaugural team, will take pride of place forever, outside the spiritual home of St George, Jubilee Oval.

The Legends Walk was officially opened on March 6, 2004 by Immortal Norm Provan and was established to recognise significant achievements and personal contributions to the success of the St George District Rugby League Football Club and St George Illawarra Dragons since 1921.

Creagh, Hornby and Nightingale all represented the Dragons and their country with distinction and played over 265 games for the Club, while the history and legacy that is St George, would not have been possible without the efforts of the inaugural team in 1921.

Creagh, a 270-game veteran started his career as a winger for the Dragons in 2003, playing through until 2016 where he finished his career as a second rower. A Premiership player in 2010, World Club Challenge winner in 2011 and Club Captain from 2013-2015, Creagh also made 11 appearances for NSW and two for Australia during his career.

“It’s truly an honour and very humbling to be inducted into what is a very talented group,” Creagh said. “To be inducted today alongside two of my great mates also makes it that little bit extra special.

“To have my name etched in history at what is one of the most iconic grounds in Sydney is great, it is a really special place and I have many great memories here.

“The achievements of all the men in this group are incredible and I can’t express in words how proud I am to have been inducted.”

Hornby captained the Premiership-winning 2010 side and also made three appearances for NSW and one for Australia during his 12-year first grade career.

Hornby came through the grades in the Illawarra before establishing himself in the top grade as a fullback in 2002 and the Club’s halfback by 2008.

Hornby surpassed the great Norm Provan’s record of most first-grade games for the club in 2012 and finished his career having played a club record, 273 games.

“This is a huge honour and something of which I am very proud,” Hornby said. “It’s a great achievement and a great acknowledgement for all of us here today off the back of all the effort and sacrifices we made as individuals, and as clubman.

“I was lucky enough to win a Premiership, but this today is right up there as the best individual accolade I have received as a player.

“This club means the world to me and to be here today in the same area with Immortals of the game, other Premiership winners and great Dragons men, is quite humbling.”

Local St George junior Nightingale started his rugby league journey at the infamous Renown United and after making his NRL debut in 2007, went on to play 266 games, placing him third in line behind Hornby and Creagh in terms of club appearances.

A winger with speed to burn and an uncanny knack of finding his way to the try line, Nightingale represented New Zealand on 33 occasions and is one of only four players to have scored more than 100 tries for the St George Illawarra Dragons.

“It’s an extremely proud moment for me and my family,” Nightingale said. “As a local junior and someone who came up through the grades here at St George, it’s very humbling and I’m truly grateful.

“To be recognised in this way at a venue that I hold so close to my heart, is something that I’ll reflect on in a positive way for the rest of my life.

“The Legends Walk is an impressive set-up and to be here alongside a host of stars and legends of the club is something of which I am truly proud.”

“The 1921 team fought for so long to gain entry into the NSWRL Premiership and as a player and administrator, I really have the people involved in that team to thank for giving me the opportunity to be able to represent this great club,” he said.

“The other three men speak for themselves and thoroughly deserve this honour. They epitomise everything this club is about and were all part of the 2010 Premiership winning side.

“When you look down the Legends Walk and see the quality and calibre of player on display, these three do not look out of place. It is a true testament to their individual talent, desire, and success, but most notably the selflessness they showed when representing the Red V.

“It is great that we have been able to recognise all of today’s inductees, their place in the Legends Walk will be on display for future generations as inspiration and testament to the great service and dedication they gave this great club.”