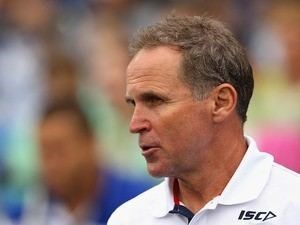 The undoubted highlight of Ted Glossop’s one year as St George coach was the 16–8 defeat of Balmain in the final of the National Panasonic Cup. Saints had enjoyed little success in the midweek knockout competition that was introduced in 1974; their best result had been a loss to Easts in the 1978 final. Glossop called the triumph

‘an important part of the history of the club … it’ll be great for the players to know what they’ve done ranks with some of the deeds in the past’.

Skipper Craig Young lifted the trophy in his 12th and last season as a player; when he announced his retirement at the end of the season he had captained the Dragons in a record 173 of his 234 first-grade games.

Nine days after his final game, Young was unveiled as St George’s new coach. The decision was also made to return home games to Kogarah Oval, after two years at the SCG and one at Belmore.

Average home crowds increased by 60 per cent in 1989, but they cheered on an inconsistent Saints side, which won seven games against teams that finished higher on the ladder, but lost five teams to teams that ended up below them. The team was led by centre Brian Johnston, but when a chronic knee injury forced his retirement before a ball was kicked in 1990, the team was left with only one Test player, second rower Wally Fullerton Smith, and three others with State of Origin experience: Graeme Wynn, Mick Potter and Brad Mackay, who had a total of four Origin appearances between them. St George would finish the year in 12th place on the ladder (out of 16, Brisbane, Newcastle and Gold Coast having joined the premiership in 1988), but there were encouraging signs: two Dragons, centre Mark Coyne (signed from Brisbane Brothers) and winger Ricky Walford (from North Sydney), made their interstate debut during the year, and Mackay, a 21-year-old lock from the Brighton Seagulls, scored three tries in his first Test, matching the feat of another Saint, Bob Bugden, who had claimed a hat-trick against France in 1960. Wallaby convert Scott Gourley, whose father Robin wore the red and white in the 1965 and 1966 Grand Finals, showed enormous promise. But Young was controversially sacked as coach in the week before the last game of the season. Brian Smith, the former Illawarra and Hull (UK) coach who had appeared in 14 first-grade games for St George in 1974, was named as his replacement.

Smith recognised quickly that Saints were now what he called an ‘inner city club’, which meant the local district was no longer producing the boundless football talent it has provided in the past.

‘The club,’ he said, ‘needed a change in attitude towards [its] recruitment policy’.

His first season started promisingly, with three wins in the first four games, but by round 8 the team had slumped to 10th. At this point, the great English winger Martin Offiah joined the club and made a huge impact, scoring 11 tries in his first eight games, including a hat-trick against Easts. Most importantly, he brought gravitas to a young, highly promising team. St George thrashed Souths 30–6 at Kogarah on Offiah’s debut and won eight of his next 10 games, to climb to fourth before fading at the end of the season. The team had made substantial progress. Hooker Wayne Collins, signed from Canberra, was outstanding in his first season in the Red V and Gourley played for Australia. Fullback Potter, enjoying a renaissance after years battling injury, won his second Dally M player-of-the-year award, seven years after his first, when he was with Canterbury.

St George reached the Grand Final in 1992 and 1993, but the seasons were hardly the same. Brisbane were the dominant side throughout 1992, with the Dragons, boosted further by the addition of second rower David Barnhill from Canberra and halfback Noel Goldthorpe from Wests, one of several teams battling for places in the top five. Eight wins from their last nine games before the semi-finals pushed Smith’s team into second position, but their battles through the playoffs — a 18–16 loss to Illawarra, then 3–2 and 4–0 wins over Newcastle and the Steelers respectively  — demonstrated that they were only just the second-best team in the premiership. Saints were outstanding in the first half of the grand final, Walford scoring a spectacular try and the Broncos leading only 6–4 at the break, but the final score of 28–8 was a fair reflection of the difference between the two teams.

A year later, St George were the best team for much of the year, and especially in the first two weeks of the finals, when they swept aside Canberra 31–10 and Canterbury 27–12, with Collins and Coyne in superb form. But in a rematch against Brisbane, prop Jason Stevens broke his thumb and was out of the game in the first minute and the Dragons never found their rhythm, turning over too much possession and going down 14–6. Though he would remain at Kogarah for two more seasons, the single-minded Smith — a remarkably thorough leader (Saints CEO Geoff Carr described him as ‘an 80 hours a week coach’), astute judge of football talent and masterful user of the interchange bench — would never win a premiership with the Dragons.

His final season took place amid the carnage created by the Super League war. Rumours abounded that St George might merge with Cronulla or the Roosters, that they would join the rebel competition or — as they eventually chose to do — ‘stay loyal’ to the Australian Rugby League. Smith left to coach Bradford in England, Mackay joined the new Western Reds franchise and by 1997 all of Gourley, Goldthorpe, Stevens and rising stars Gorden Tallis and Anthony Mundine were playing at different clubs. Amid all this upheaval, new coach David Waite’s effort in getting Saints to the 1996 Grand Final, after sneaking into the eight-team finals by finishing seventh on the ladder, was quite an achievement. The Dragons won three consecutive finals matches in the same year for just the second time in the club’s history (after 1949), but went down 20–8 to Manly in the premiership decider.