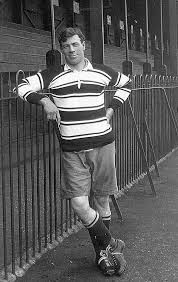 The St George District Rugby League Football Club was officially formed at the Kogarah School of Arts on November 8, 1920 and played their first Premiership match on St George’s Day, April 23, 1921 against Glebe at the Sydney Sports Ground.

“From humble beginnings in 1921, the Dragons today are one of the most famous and recognisable brands in international sport, with a rich and proud history,” said St George District Rugby League Club Chairman and St George Illawarra Dragons Director, Craig Young.

“100 years is a significant milestone and we are excited to have developed a range of events and activities to officially acknowledge and celebrate the past, and as the legendary Club administrator Frank Facer once said to me, ‘we never forget those who dug the well’.

“There have been so many memorable moments, gifted players and generations of passionate supporters, all tied together with the bond and spirit of the ‘red v’ and we look forward to celebrating with all ‘red v’ supporters throughout 2021”, added Young.

“St George has a proud and successful history which formed the foundations of the St George Illawarra Dragons, along with the Illawarra Steelers,” said Gordon. “We are proud of our history and look forward to playing our part in the celebrations throughout 2021”.

Media personality Tim Gilbert was the MC for the official launch and guests in attendance included former Prime Minister and Dragons number one Ticket Holder John Howard OM, AC who spoke about his introduction and love for the Dragons and the “inspirational” glory days.

A number of other political Dragons fans were also in attendance including President of NSW Parliament The Hon. John Ajaka, MLC; The Hon. Mark Latham, MLC, and former Australian Senator Graham Richardson AO.

Key features of the centenary throughout 2021 will include:

Specific dates for the above mentioned events and others are yet to be determined and will be announced in early 2021. Noting that the 2021 NRL Dragons draw and any potential COVID-19 restrictions will influence these dates.

This website showcases historical and rare footage and player profiles as well as the “Spirit of the Red V” Podcast with Tim Gilbert and Geoff Armstrong – who discuss the rich history of the Red V and its significant achievements since 1921, including episodes on each year of the world record 11 consecutive Premierships.