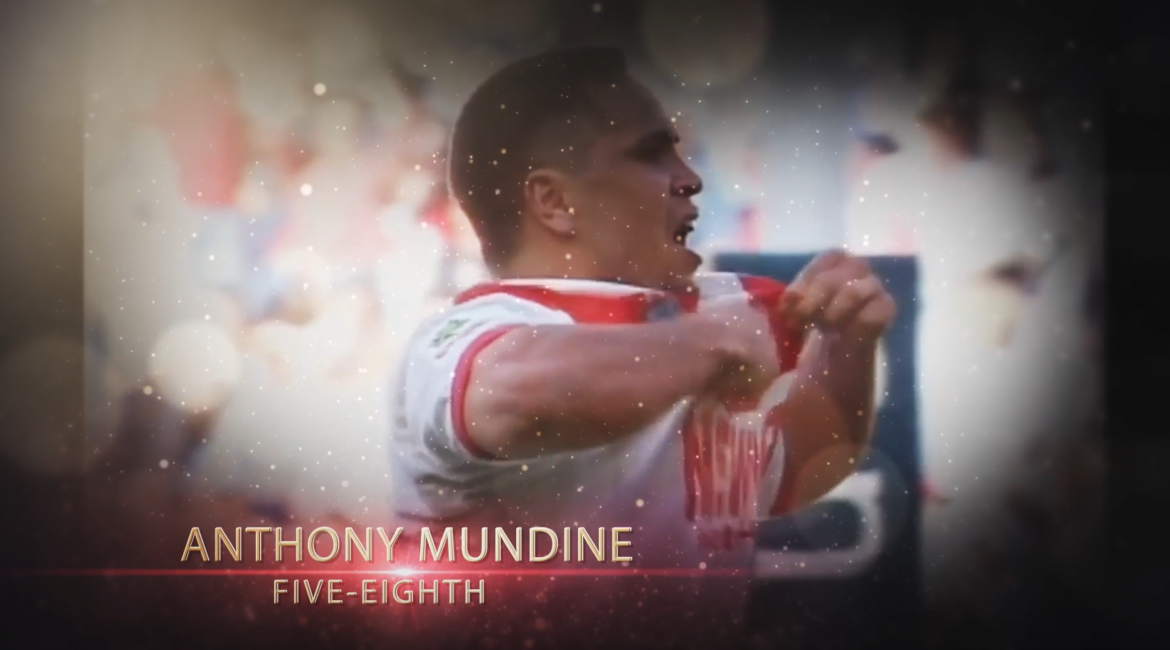 Trent Barrett made his premiership debut for the Illawarra Steelers in 1996 as an 18-year-old, and at five-eighth for NSW a year later while still a teenager. He was initially obliged to play halfback with St George Illawarra, with Anthony Mundine in the No. 6 jersey, but flourished with Mundine’s departure, winning the club’s player of the year, the Dally M player of the year and the Dally M five-eighth of the year awards in 2000. All 15 of his Tests and six of his Origin appearances came while he was with the Dragons. Barrett became the St George Illawarra captain late in the 2001 season, when aged 23, and remained in the role until his departure for English club Wigan at the end of 2006. He played 45 first-grade games for Illawarra and 154 games for St George Illawarra, leaving him one short of the joint venture’s ‘200 club’.

Tony Branson was a five-eighth from Nowra who represented Country Firsts and NSW in 1967 before making the 1967–68 Kangaroo squad, when he chosen ahead of Bob Fulton. He played five Tests on tour and two more during the 1968 World Cup, after he joined St George. Branson signed for the Dragons at the same time as Wallaby five-eighth Phil Hawthorne, which meant he often played in the centres with Hawthorne in the No. 6 jumper during his early years at Kogarah. He was Saints’ regular five-eighth in 1971 and 1972, and for the first eight rounds in 1973 until he was slowed by a knee injury. Branson played a Test in New Zealand in 1971 (with Fulton in the centres) and in that year’s Grand Final against Souths.

A Newcastle product who made his first-grade debut at age 18 at the start of 1951, Peter Carroll split time between five-eighth, half and centre for the next three years and then suffered a bad knee injury in 1954. He was mostly in the reserves until 1956, when he enjoyed a renaissance under the coaching of Norm Tipping, playing in 16 matches, including the grand final win over Balmain, the start of the 11 premierships. Carroll was vice-captain in 1957 and missed only one game in ’58, the grand final, when he had to withdraw because of a leg injury, and lock Brian Clay replaced him at five-eighth. He played only one more first-grade game, his 100th appearance, in 1959.

Known as ‘Pop or ‘Poppa’, Brian Clay played in eight Grand Finals in Saints’ 11-year run, missing 1962 and 1963, each time because of a broken arm. Clay came to the Dragons in 1957 from Griffith, where he had been captain coach after playing for Newtown in the 1954 and 1955 Grand Finals. He was known primarily a centre and lock when he came to St George (though he had played five-eighth for Australia in the 1957 World Cup). An injury to Peter Carroll meant Clay played five-eighth in the 1958 Grand Final, and he remained there until 1967. He toured with the 1959–60 Kangaroos, playing in five Tests, and played his 200th grade game for St George in his final match, the 1967 preliminary final loss to Canterbury.

A champion footballer of the late 1940s and early ’50s, Johnny Hawke would have been Australian captain in 1950 but for a badly timed knee injury. He had joined St George from Canberra after the 1948–49 Kangaroo tour, on which he played four Tests and was magnificent as he led his new club to their second premiership. Perhaps his greatest performance came in the semi-final against Souths when he overcame a suspected broken jaw to inspire a famous victory. Hawke captained St George in every game he played for the club, and was captain-coach in 1951–52, reaching the finals in both years.

Phil Hawthorne was a champion rugby union five-eighth who had played for the Wallabies in 1962 when aged 18, before switching to league with St George in 1968. From 1968 to 1970 he was Saints’ first-choice five-eighth, forcing Tony Branson into the centres. Hawthorne was a field goal specialist, kicking 55 field goals in 52 games from 1968 to 1970 (when they were worth two points and games were played under the four-tackle rule). He played for NSW and Australia in 1970, captaining Australia in the third Ashes Test match. He had captained St George for the first time the day before he was named Test skipper, taking the job when Graeme Langlands and Billy Smith were ruled out with injuries that would also keep them out of the Test. Hawthorne lost his place in 1971, when coach Jack Gibson preferred the more rugged Branson at five-eighth, and left for Easts in 1972

Anthony Mundine was part of the Australian Under-19 side that thrashed a Great Britain Academy XIII in two junior Tests in 1994, a year after making his first-grade debut for St George as an 18-year-old. He was a leading figure in the Dragons’ Grand Final run in 1996, but during that season announced he was joining Brisbane for the 1997 Super League season. He was Saints’ leading tryscorer in 1996, with 15 tries. Mundine returned to Saints in 1998, and played in the 1999 Origin series and Grand Final before quitting league in 2000 to begin a successful boxing career. He scored 17 tries in 23 games in 1999, when he was the club’s second best tryscorer, behind Nathan Blacklock.

Arnold Traynor played President’s Cup for St George in 1920 and in the reserves in 1921, and was then a constant presence in the firsts for most of the decade. Considered too small for rep footy, Traynor became the ultimate clubman. He was captain for two years before Frank Burge arrived in 1927, and had perhaps his finest season under Burge, when Saints reached the premiership final. He was the first St George footballer to appear in 100 games in all competitions and ended his career in the 1930 premiership final.